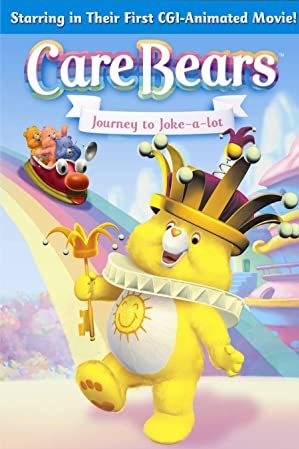 Care Bears: Journey to Joke-A-Lot is the first Care Bears movie to be animated in 3D, as well as the first to be released straight to DVD. It was released in October 5, 2004, produced by Nelvana and distributed by Family Home Entertainment. It was followed by Care Bears: Big Wish Movie in 2005.

The story follows Funshine Bear, who has left Care-A-Lot after Grumpy unintentionally hurt his feelings. He ends up in the exciting, hilarious world of Joke-A-Lot, where he meets a little pig girl named Gig, as well as Sir Funnybone, who declares Funshine the king of Joke-A-Lot. But Funshine is soon torn between which place he truly calls home, and little does Funshine know, something not-so-funny is going on as Funnybone secretly plots to use Funshine's rule to steal the royal jewels of Joke-a-Lot.

Funshines lists various ways to make people laugh in his "I Want" Song.

Funshines lists various ways to make people laugh in his "I Want" Song.