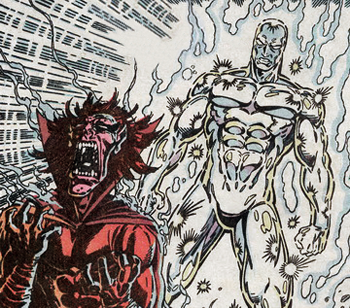 Anything "sufficiently" good didn't need to be intelligent or powerful in order to protect itself because good was invincible enough just being there. Good things had "auras" of purity or goodness that could slice and dice evil or evil-aligned beings like blades, atomize them entirely or at least leave a second or third degree burn. Even the greatest threats would run off screaming like nursery girls at the mere rumor of their presence, ignoring the fact that the objects of their fear were otherwise absolutely harmless.

Often times, the more proactive heroes were unable to have such an effect due to lesser purity, which left the local priest, nun or pure child to act as a Deus ex Machina for when they get overwhelmed by the legions of darkness. Objects touched or blessed by objectively good characters could gain similar protective qualities, and religious sanctuaries were the mightiest of fortresses when evil was on your tail. This injurious side of good is becoming rare as readers and viewers learn to take Grey-and-Gray Morality for granted, but expect very strong showings in religious literature.

Note that differences of belief weren't ever an issue because it was taken for granted that the good thing or person really was good, and not just belonging to the majority faith, sometimes resulting in a rather heavy handed Aesop for characters who were from the dominant church or local equivalent.

An old and Discredited Trope, with some exceptions. It's largely been absorbed by the Smite Evil trope. It's an interesting cultural study; people no longer think that Good, itself, is invincible, but used correctly it can really kick ass! If it is used in modern works, it's usually in ones centered squarely on the Idealistic side of the Sliding Scale of Idealism Versus Cynicism, or where the baddies ARE shadows/darkness and thus are Weakened by the Light. It's often utilized alongside Only the Pure of Heart.

Sub-Trope of Supernatural Repellent. Super-Trope to Holy Burns Evil. The inverse of this trope is Allergic to Evil (for people) and Cross-Melting Aura (for holy artifacts). Might be a reason for Too Spicy for Yog-Sothoth. See also Revive Kills Zombie. Contrast with Holy Hand Grenade where it is the power of Light instead of Goodness which burns; a crucial difference in a setting where Good is not equivalent to Light and where religion and purity might actually be oppressive or villainous. Also contrast Holy Is Not Safe where the intensity of the holiness will damage or consume anyone who fails to meet its rather stringent standards.

Jack's sword, forged by three gods as a weapon against Aku, is the sole weapon capable of harming the shapeshifting master of darkness. But, as Aku discovers, it can't harm anything that is inherently good - like Jack himself.

Jack's sword, forged by three gods as a weapon against Aku, is the sole weapon capable of harming the shapeshifting master of darkness. But, as Aku discovers, it can't harm anything that is inherently good - like Jack himself.