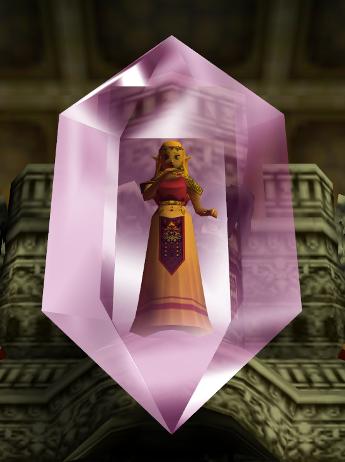 Diamonds are forever, which comes in handy when you want to make someone really suffer during a life sentence while keeping them (securely!) caged.

Characters in a Crystal Prison are put inside some gorgeous, colorful and exquisitely cut variety of gem. This crystal is usually made of Phlebotinum capable of keeping the captive alive despite the lack of air, either in suspended animation or forever awake. This escape proof prison may trap them bodily like a bug in amber; in fact, if the Crystal Prison isn't coffin sized it's going to be small enough to be worn as jewelry.

While breaking the gem can release the captive, attempting this literal jailbreak may not be a guarantee of getting the captive out alive. Breaking it could also shatter or kill the captive, or the gem may be unbreakable unless the jailer/creator somehow dispels it. That being said, a prisoner who is pushed into using Heroic Resolve may crack open the crystal through sheer force of will.

If the crystal is imprisoning a very important character, and if Elemental Rock–Paper–Scissors is in-universe at the time, this can get a person or persons from all the various groups to combine their powers into one technique, preferably in a big Finale or at least a Swirly Energy Thingy that features Power Glows, and break the crystalline prison, in a show of Dramatic Shattering.

Contrast Soul Jar, where the soul is put in a crystal, Body to Jewel, where the character becomes crystal, or Crystal Landscape, where the character can explore a place of crystal. People Jars are sometimes this trope with "science." Also compare Harmless Freezing, with ice blocks being the main difference. See also Mineral MacGuffin, Magic Mirror, Phantom Zone and Power Crystal. Not to be confused with a Gilded Cage, which this is very unlikely to be unless it contains some kind of plushly-appointed pocket dimension.

As you can see from the example distribution, this is most common in anime and video games.

The Death Song spews amber, which it uses to immobilize its prey.

The Death Song spews amber, which it uses to immobilize its prey.