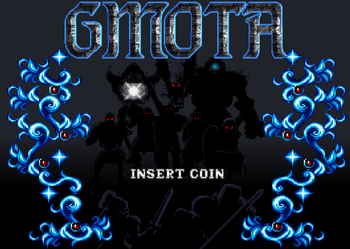 GMOTA (Go Medieval On Their Asses) is a Doom mod by Combine-Kegan, a fantasy arcade beat-em-up mod. This mod adds whole new classes, and Doom monsters are replaced with new fantasy-themed ones.
Advertisement:

This mod currently has three heroes.

LORD BLAZKOWICZ: The savior and defender of the land of Lothar. He mainly uses two weapons, The Zarach(magic sword), and the Blazter(arm cannon). He is also exceptionally good at throwing weapons like javelins or torches.
DOOMSLAYER: The warrior who destroyed the legions of hell and their leader. His arsenals are a great sword and many ranged weapons. He can move even faster than Blaz.
KUSTAM: The stalwart champion of the Lotharian arena. He uses his hand cannon and telescoping staff to dish out powerful strikes. He suits a slower, more methodical playstyle.

The latest version of the mod can be downloaded here

This mod contains examples of: