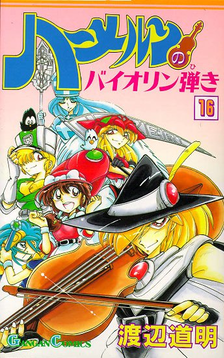 Once upon a time, there was a box containing all the evils in the world. It was opened by a woman named Pandora and the land was plunged in darkness. In a time of castles and kings, demons terrorize the land, enslaving humanity before the might of the demon army. The lands cry out for a hero, and that cry is answered by Hamel, a mysterious cloaked stranger who commands massive power while wielding his Big Freaking...Violin.

Created by Michiaki Watanabe, Hameln spanned 37 volumes of manga and a 25-episode anime that could not be more different from one another in terms of plot, characterizations and overall tone. The series also spawned a half-hour long movie based upon the manga. Unless specifically mentioned otherwise, the tropes listed below are from Violinist Of Hameln manga (or are those few that apply to both the manga and the anime).

Over ten years later in 2008, much to the surprise of fans, Watanabe published a Gaiden chapter leading up to a sequel manga, Violinist of Hameln: Shchelkunchik.

A few years after the sequel manga abruptly ended, Watanabe created a sort of Alternate Universe version of the original series. Violinist of Hameln Zoku. Zoku can mean "family" or "tribe", in this case "family" is the most probable intention. Very little is known about the series, as no one has attempted to translate it. It started in 2013 and it's still running.