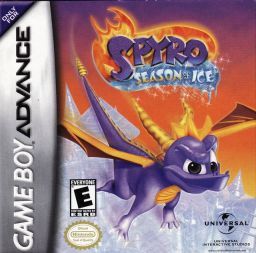 The fourth Spyro the Dragon game, released on the Game Boy Advance in 2001. The first not to be developed by Insomniac, it was developed by Digital Eclipse.note Although Ted Price and the Insomniac staff earned their spot in this game's special thanks during the credits; in a later interview, Ted Price of Insomniac, while disowning Spyro: Enter the Dragonfly, gave Approval of God to "the GBA games".

A sorcerer named Grendor has frozen all the fairies of the dragon realms into ice, and plans to take all their wings for a spell to cure his headache (ironically induced by tinkering with Bianca's spellbook without her permission). Spyro and Sparx set out to rescue the fairies.