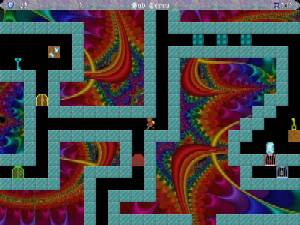 Mazes, gems, and keys
SubTerra is a puzzle game developed by Crystal Shard and originally published by Spiderweb Software. It can be downloaded here.

Not to be confused with a film Subterra or with a game Subterranean Animism.

The game's main objective is to get gems and then reach the exit, while any number of lethal obstacles get in your way, such as falling rocks, dragons, explosions, fire and water, and floating skulls. The obstacles include the gems themselves, as a gem falling on your head will kill you. Depending on the level, you need to use careful planning, quick reflexes, or both. The game incorporates many elements from Boulder Dash, Chip's Challenge, Sokoban, and Laser Light.

There is also a second difficulty level, which requires you to get more gems in a level, reach a special and usually harder-to-reach exit, and imposes a time limit. In a nice twist, all tutorial levels have a secret room with a pretty difficult puzzle, which is required to solve the tutorial on hard mode. The original game contains 108 levels in the Prime level set; a level editor and yearly level design contest ensure that there are many more out there.

Sub Terra Draconis is the sequel.