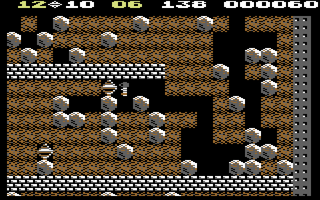 A genre of Puzzle Game with some sort of terrain to dig through and Selective Gravity, wherein objects fall down (squashing characters in their path) but characters generally don't. They can be seen as Puzzle Platformer with a flying protagonist, or a Maze Game with a more obstructed environment; the emphasis on solving puzzles as opposed to dexterity varies from one game to another.

The Trope Codifier is Boulder Dash (of which a huge number of freeware ports exist), and many games in the genre name themselves after a kind of gemstone, a kind of cave, or both.