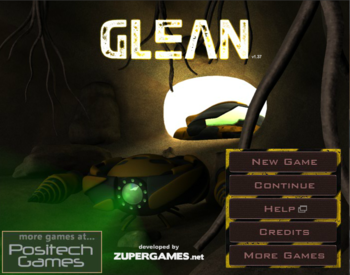 Glean is an Adobe Flash video game developed by Zupergames and published by Positech Games released in 2012. In it, you play as an orange robot with drills who must travel from planet to planet, collecting resources and trying to dig deeper and deeper. Along the way, you have to watch out to not take too much damage by overheating and to not run out of fuel. You're free to explore planets in whichever order or way you like - the only limit is in how many upgrades you have.

Glean 2 was released in 2014. It is a very similar game to the original in terms of style and gameplay, though there are new worlds to explore as well as minor gameplay and interface tweaks.