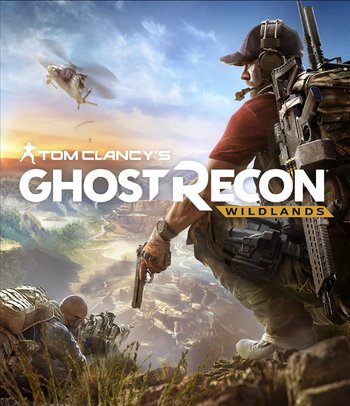 Tom Clancy's Ghost Recon Wildlands is a Wide-Open Sandbox Third-Person Shooter video game developed by Ubisoft Paris and Milan and the tenth installment in the Tom Clancy's Ghost Recon series. It places a large emphasis on open-world exploration and non-linear gameplay. It is an interquel set in 2019, five years after the Advanced Warfighter duology and five years before Future Soldier.

Ghost Recon Wildlands is set in Bolivia after a vicious Mexican drug cartel called the Santa Blanca cartel has taken control of the government through a campaign of violence and corruption. Under Santa Blanca’s influence, Bolivia becomes the world's largest producer of cocaine and effectively becomes a narco-state

After the cartel bombs a US embassy in La Paz and then kidnaps, tortures, and kills undercover DEA special agent Ricardo "Ricky" Sandoval, their status is upgraded to a narco-terrorist organization and they are put near the top of the most wanted list. In order to stop the problem, the CIA, DEA and JSOC has decided to send the Ghosts as part of Operation Kingslayer in order to dismantle the cartel piece by piece.

A Short Film Prequel focusing on Ricky Sandoval and his capture by the cartel called Ghost Recon Wildlands: War Within the Cartel was released February 16, 2017

A companion documentary called Wildlands exploring the war on drugs in South America and what it means to those on both sides of the law was released on March 6th, 2017

A Prequel novel Tom Clancy's Ghost Recon Wildlands: Dark Waters written by Richard Dansky was released on 7 March 2017, about a previous mission in the Amazon involving a newly promoted Nomad and his team fighting against a group of rogue Venezuelan soldiers.

In May 2019, Ubisoft announced that a sequel known as Ghost Recon Breakpoint was under development, with it being released on October 4th, 2019.