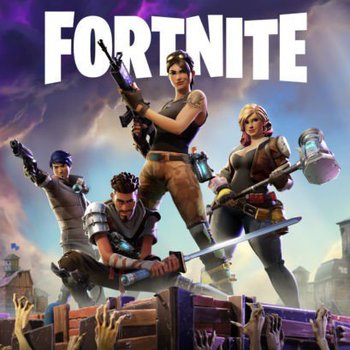 Fortnitenote The game's title is meant to be read as a literal "fort night", meaning "a period of time lasting two weeks"., which is a rare, but totally, grammatically legitimate way of interpreting the word fortnight. is a Third-Person Shooter developed by Epic Games and released into Early Access on July 25, 2017, ending on June 30, 2020. It's a building/exploration game with a Zombie Apocalypse-style vibe.

Fortnite is effectively three games; each of the three supermodes have their own unique rules and mechanics:

The similarities in Battle Royale mode to PlayerUnknown's Battlegrounds did not go unnoticed, not least of all by the latter's developers who went as far as to sue Epic Games (the suit was eventually dropped) — but the mode has become extremely popular, especially after it was offered free-to-play separately from the main game. The Battle Royale mode is now one of the most popular games on the planet. It is also widely regarded as the first significantly popular game with the post-Millennial generational cohort born after the year 2000.

Battle Royale and Creative are available for free with the option to purchase cosmetic items on Microsoft Windows, Xbox One, Xbox Series X|S, PlayStation 4, PlayStation 5, Nintendo Switch, Android, and iOS. However, the iOS version is currently unavailable for download due to Apple removing the game from the App Store.

Save the World is only available on the Windows, PlayStation and Xbox versions. It was to become free-to-play in a manner similar to Battle Royale, but on June 30, 2020, Epic Games reversed course and made Save the World an exclusively paid mode.

Starting from Chapter 1 Season 4, Battle Royale introduced an overarching narrative explaining the various events taking place as the weeks went by. A full recap can be found here.

Note that some seasons that take place before the Chapter 2 ones are usually referred without the "Chapter 1" part.

As part of the 2020 Crossover event, Marvel published Fortnite X Marvel Nexus War that gives backstory to how Thor came to the Fortnite world, while DC published Batman/Fortnite: Zero Point for the 2021 event. This was followed by Fortnite X Marvel Zero War series in 2022.

open/close all folders
All Modes
Save the World
Battle Royale
Special Limited Time Modes
The special limited time modes described in this folder include:
Creative

Woman: Aside from the part where we almost died, that was amazing!
Ramirez: Hey, don't mention it. It's all in a nite's work.
(A flare is fired from a man on a pizza restaurant sign)
Man: HELP!
Ramirez: (to her squadmates) All right, guys, who's up for pizza?
Ken: Oh, yeah... PIZZA!

Alternative Title(s): Fortnite Save The World