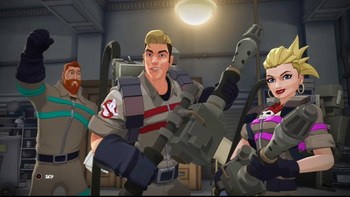 All your favorite ghost-bustin' heroes are... somewhere else.
Advertisement:

The game actually takes place some time after the 2016 film in which you actually play as an unrelated team that opened up as part of the franchise after the success of the film Ghostbusters. As they're off doing dealing with ghosts in Washington D.C, the team handle calls around the city in their stead.

The gameplay is a 2.5D top down twin stick shooter which has your character running around stages and zapping ghosts as you go along.