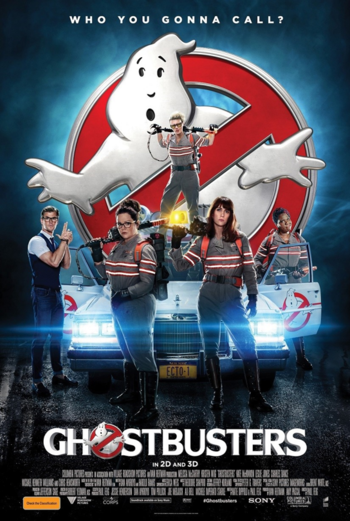 Answer the Call.
"In my closet, down the hall
I see shadows all on my wall
Man, these monsters be big and tall
Ghostbusters, who you gon' call?"
— Missy Elliott
Advertisement:

Ghostbusters (sometimes referred to as Ghostbusters: Answer the Call in publicity materials, as well as the DVD release

) is a 2016 reboot of the 1984 comedy of the same name. Directed by Paul Feig, the movie stars Melissa McCarthy, Kristen Wiig, Kate McKinnon and Leslie Jones as the Gender Flipped new team, with Chris Hemsworth as their dimwitted receptionist Kevin.

The plot involves quantum physicist Erin Gilbert (Wiig) discovering that her estranged friend and former partner Abby Yates (McCarthy) has republished a book the two wrote expressing their belief in ghosts. Fearing that the book will destroy her chances of achieving tenure at Columbia University, Gilbert attempts to persuade Yates to take the book down from the Internet, only to become roped into an investigation into a supposedly haunted mansion conducted by Yates and her partner, eccentric engineer Jillian Holtzmann (McKinnon). When the investigation uncovers an actual, genuine haunting, the three — after being fired from their respective academic institutions — decide to investigate the increase in paranormal activity and conclusively prove the existence of ghosts. After MTA worker Patty Tolan (Jones) approaches them following a haunting at a subway station, the four women discover a terrible plot threatening all of New York, and join forces as the Ghostbusters to save the day...

The film is not a continuation of the previous films, but a Continuity Reboot. There are a number of cameos from the cast of the original film but the cameos themselves are not role reprises, but new characters altogether.

The characters appear in the 2017 IDW Publishing Crisis Crossover mini-series Ghostbusters 101, in which the main casts of both the original two films and the 2016 film meet and team up against a new threat. Furthermore, another limited IDW title featuring this film's characters —Ghostbusters: Answer the Call— was also published later in the year.

2021's Ghostbusters: Afterlife is an Un-Reboot that ignores this film and reprises the original continuity, being set a few decades after Ghostbusters II.