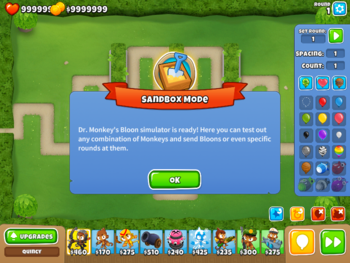 In quite a lot of games there's a lot of huge and cool environments or areas. They may feature lush interaction, cool challenges, points of interest, or just contain a shit-ton of stuff that you can theoretically do, but wouldn't be practical or optimal in the main game. Some games thus feature a bonus mode where the player can interact with all of that with either reduced constraints or none at all.

In Sandbox Mode, the player usually can't die or get a game over, due to having unlimited health/time or an absurd amount of it, or some other form of game-ending danger removed. If there are in-game resources, they'll likely also be infinite or maxed out to let the player experiment freely. The mode has to be unlocked almost every time, as obviously developers have to let the player try out the main game they paid for first, and in such cases may overlap with New Game+. The game may also give the player certain abilities that are not normally available, like flight or game parameter changes. In most cases, nothing done in this mode will count towards achievements or other challenges due to generally becoming extremely easy, unless they're specific to the mode.

Websites that are considered part of Web 2.0, including wikis, frequently have sandboxes (like our Wiki Sandbox) to let users test things like formatting as well. If the website also puts a time limit for content creation, it may remove it for the purposes of letting them try it without pressure of a timer. However, if a sandbox is publically visible, users are expected to still have some decency when they play around in it.

Not to be confused with Debug Room, which is more for the programmer's benefit than player experimentation, is typically found by typing in some secret code rather than given normally, and features options that affect the main game. This is also different from Endless Game in that whether the endless game ends actually depends on the player skill, so if the player sucks, they won't be able to continue, but here they don't have to worry about that and don't have the sense of progression either. Additionally, the Training Stage is different in that it's, well, to actually train (usually combos for fighting games) and often made simplistic on purpose (even if it does let you test things out, it's still often done within boundaries of regular gameplay). And obviously not to be confused with the Wide-Open Sandbox genre.