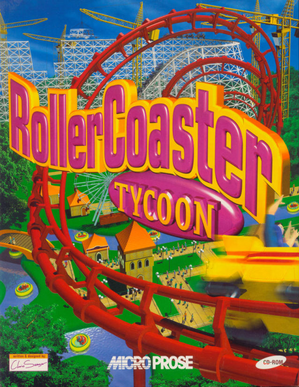 RollerCoaster Tycoon is a simulation strategy computer game series that simulates theme park management and roller coaster design. The first two games were developed by MicroProse and Chris Sawyer and published by Hasbro Interactive and later Infogrames (today Atari SA), and they were widely praised for their originality and success in simulating a theme park. The roller coaster designer was a popular feature and was praised for its high attention to detail, with many real types of coaster available, and allowing very elaborate coasters to be built.
Advertisement:

The third game, which made the Video Game 3D Leap, was developed by Frontier Developments, who later went on the create the spiritual successor Planet Coaster. The most recent main game, titled World, is developed by Nvizzio Creations for Windows and Linux.

The original game was ported to Xbox in 2004, and ended up being mostly the same, though its controls were largely unsuited for a gamepad. A port of the original version for iOS and Android devices was planned for release in early 2013. It was put on hold when Atari filed for bankruptcy, but was ultimately Un-Canceled with the release of Classic in December 2016. The first two games (in deluxe versions with all expansions) are also available on Steam and GOG.com, and an Updated Re-release version of the third game is now available on Steam and the Epic Games Store after having been unavailable for some time due to a licensing dispute. An iOS port of RCT3, without the implementation of the expansion packs, can be found on the App Store.

In the track editor for Roller Coaster Tycoon 3, pieces which cannot be used are grayed out.

Example of:
Gray Is Useless

In the track editor for Roller Coaster Tycoon 3, pieces which cannot be used are grayed out.