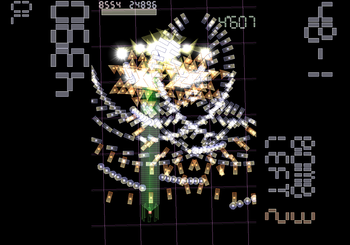 There is a boss under there somewhere. And that's not even its final form.
Released for personal computers in 2003 by Kenta Cho, rRootage is Bullet Hell stripped down to the absolute essentials. You control a small ship which can fire a continuous laser beam, and dependent on the game mode, also utilize a limited secondary defensive power. The game has only one kind of opponent: a large, durable boss enemy which fires lots and lots of bullets. Your objective in each level is to take out five of these bosses in a row, each one sporting a different arsenal.
Advertisement:

The game has four modes: one 'normal' mode, and three special Arrange Modes which are based on three influential titles in the bullet hell genre. The main gameplay difference between each mode is the nature of the secondary power given to your ship.

Normal Mode: Your ship has three bombs, which vaporize the bullets in a small area around it for a limited time, allowing you to get out of trouble when the bullet pattern has become too much to cope with.

PSY Mode: Inspired by Psyvariar. Secondary fire slows you down but allows you to brush up against the non-damaging portions of projectiles, which increases your Graze Meter. Fill it up and your ship becomes invincible for about three seconds.

IKA Mode: Inspired by Ikaruga. The bullets fired by the boss are either white or red, and your ship can switch between those same two colors using secondary file. When your ship touches a bullet of the same color as itself, damage is reflected at the boss instead of your ship. By carefully switching colors, you can navigate the barrage of bullets and deal extra damage to the boss while you're fighting it.

GW Mode: Inspired by Giga Wing. Your ship has a Reflect Meter which automatically refills. When it's full, holding secondary fire will surround the ship in a short-lived reflector shield. Any bullets which hit the shield will reflect damage back at the boss. There is a warmup delay in activating the shield, and a cooldown delay as your Reflect Meter refills, so you have to think carefully about the best time to make use of it.

, also created by Kenta Cho, to define its bullet patterns.

The game can be downloaded for Windows from here

. It's also available directly through some package managers on some Linux systems. A port has also been created for Apple devices, which can be bought from here

. Another port, rRootage Reloaded, found its way to the Nintendo Switch eShop on October 21, 2021.

No, beatmania IIDX 26 Rootage is not a crossover with this game.