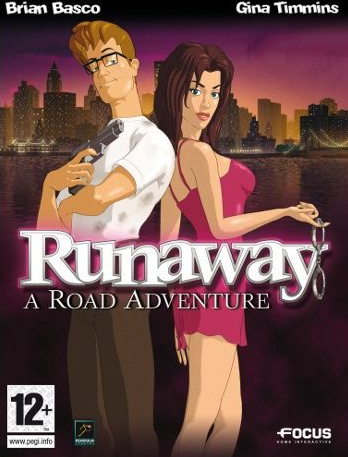 Runaway: A Road Adventure was published by Dinamic Multimedia, S.A., developed by Péndulo Studios, S.L., and released in 2001.
Advertisement:

For New Yorker Brian Basco, scientific study and having a career in Applied Physics is everything! He is as "excited as a kid in a candy store" when his application for a position at the University of Berkeley is accepted. Before setting out on the long trip from New York to California, Brian remembers one last errand to do. Little does he know that this slight detour would change his life, and his life style, forever!

Minding his own business driving along the New York streets on the way to a bookstore, he cannot avoid hitting the beautiful girl who runs out in front of his car! He does the right thing and takes her to the hospital. When she comes to, he learns that she witnessed a murder and that vicious gangsters are after her! Because Brian helped her, his life is also in danger! And so the story of Brian and Gina begins...

In this point-and-click adventure, you play Brian in 3rd person as he figures out how to avoid and escape the Mafia-like thugs chasing them. Their travels will take them to a variety of different places (a Museum, the Arizona desert etc.) during the six game chapters. Put your thinking cap on to solve situations and puzzles using objects and conversation with people they meet.

The game features drawn cartoon-like 2D and 3D graphics and cut-scenes. Its original soundtrack includes over 24 songs. Interact with almost 30 different characters with interesting, and often comical, personalities. Find and use a multitude of items that can be manipulated within the inventory window.