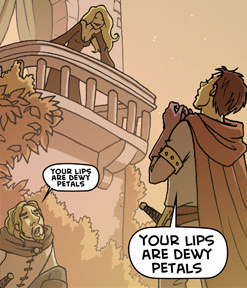 "Okay. [Cyranoing is] when a nerdy guy helps a handsome guy date the girl that he loves by telling him what to say, what to do."
— Harper, Set It Up
Advertisement:

When someone is too shy or inarticulate to pursue his dream girl, he has a friend (the Cyrano) supply his words for him. Like most Simple Plans, this naturally never works. In modern works, it's often done via Earpiece Conversation.

The plot generally plays out with the dream girl discovering the true author of the poetic courtship, and being more attracted to him than to the guy he was speaking through. Whether he's interested in her or not.

If there is a Cyrano on each side, hilarity may ensue. In such a double-Cyrano, Pair the Spares may be invoked.

Subtrope of Romantic Wingman, and a type of ghostwriter. The Trope Namer and Trope Codifier is Edmond Rostand's classic play Cyrano de Bergerac. The story may include a direct reference to the play, which will often make it very clear that the character making the reference (possibly the writer as well, possibly not) has only a very passing knowledge of the play. Could lead to a Funny Phone Misunderstanding akin to Reading the Stage Directions Out Loud.

Tina tells Tammy what to say when she's on a date with Brett. Everything Tammy hears and says will bypass her brain.

Tina tells Tammy what to say when she's on a date with Brett. Everything Tammy hears and says will bypass her brain.