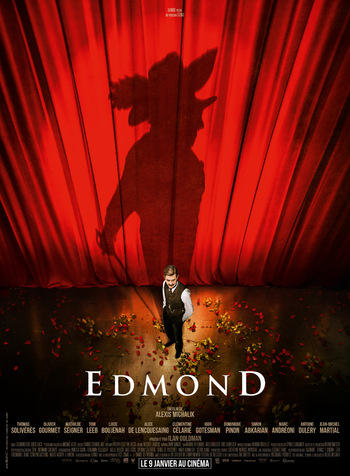 Edmond is a French comedy from 2019 directed by Alexis Michalik, in which he adapted his own play by the same name. It is about the writing of Cyrano de Bergerac by Edmond Rostand in 1897.

In a similar concept to Shakespeare in Love, Edmond Rostand is struggling to find inspiration for his next play, that he is pressured to deliver in a few days. In this fiction, real life events give him the inspiration that he needs, and he goes so far as Playing Cyrano before making it the central idea of his play.

The plot is also about the preparation and execution of the first performance of the play, which was not guaranteed to be a success. Edmond was an unsuccesful playwright, and writing in verse was going out of fashion.

Having some knowledge of Cyrano de Bergerac, or having watched the 1990 film adaptation, may be useful, as this film pretends that many quotes were delivered in real life before being written into the play.