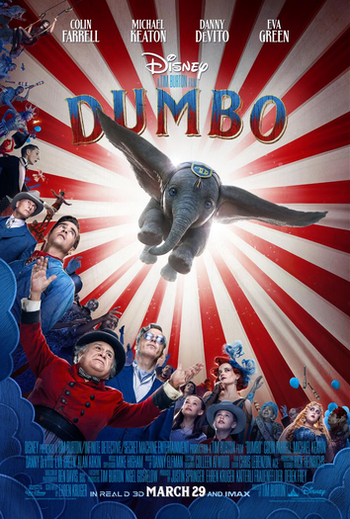 ♫ Baby mine, don't you cry
Baby mine, dry your eyes
Rest your head close to my heart
Never to part
Baby of mine♫
"We’re all family here, no matter how small."
— Milly Farrier
Advertisement:

Dumbo is a 2019 film, a live-action remake of the Disney animated classic of the same name directed by Tim Burton.

In this retelling of the story, a former circus star named Holt Farrier has returned from his service in the war and has been hired by circus owner Max Medici to take care of the baby elephant Dumbo, whose oversized ears have made him the laughingstock of the circus. Holt and his two children, Milly and Joe Farrier, befriend the little elephant, and when they discover that he can fly, they decide to make him use his talent so that Medici's circus can make a big comeback. This also draws the attention of one V.A. Vandemere, an entrepreneur who acquires Max's circus to make it part of his new theme park, Dreamland.

But behind all the bright lights and fancy attractions, Dreamland is hiding many dark secrets, and Holt's discovery of these secrets will prompt him and his children to fight to protect Dumbo from danger.