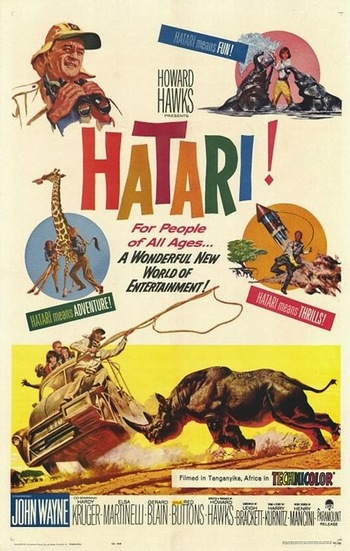 Hatari! is a 1962 Howard Hawks film about a team of animal catchers in Tanzania. Plenty of characters abound, each with their own background.

Howard Hawks decided not to use a plot for the movie, instead letting the characters develop and tying it together with Book Ends. The cast mostly averts Fake Nationality (except for Sean and Luis. The Indian is also played by an American, but not a Native one), and as a result a lot of the actors aren't on this wiki. Check The Other Wiki for details.

Hatari! was scored by Henry Mancini; "Baby Elephant Walk", a playful instrumental he wrote for the film, has proven to be enduringly popular.

Definitely not to be confused with the Icelandic band of the same name.