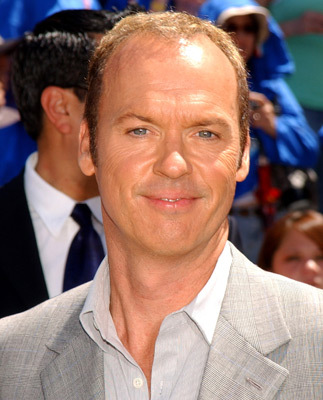 I've got two words that I want you all to remember. They're very important. And if I leave you with anything, I'm gonna leave you with these two words, and those two words are: I'm Batman.
"I'm just shocked and thankful that I've gotten away with everything - experimenting here, trying at this, failing at that, being good in some things, not so good in others. It's kind of amazing that people are still sticking by me. When they come up to me in the street, I just want to write them all cheques."
Advertisement:

As just said, his real name is Michael John Douglas, but since there was already a Michael Douglas (and a Mike Douglas

) in the Screen Actors Guild, which doesn't permit doubles on its rolls, he chose to use the last name of Keaton partly due to Buster Keaton and partly because he heard the name and thought it sounded good (he has never legally changed his name, though).

After cutting his teeth in TV sitcoms, Keaton became known for starring in comedies such as Mr. Mom, Johnny Dangerously, and Tim Burton's Beetlejuice, although he would become notable for his range in both comedy and drama when Burton cast him as the eponymous character in Batman, which was to be a return to the character's roots as a grim avenger of the night. Fans... did not open up to the casting at first, sending letters to Warner Bros. complaining that Keaton had only done comedynote which wasn't entirely true — Clean and Sober, released in 1988, was a heavily dramatic role for Keaton and was too short and too "ugly" to play Batman. In response, Warner Bros. released a quick 90-second trailer showcasing a glimpse of Keaton's badassery and seriousness in the role, shutting the naysayers up. The film, of course, ended up becoming the blockbuster of 1989, with many of the same fans who were initially skeptical of Keaton's casting now pushing for him to receive an Oscar nomination for his performance.

Keaton and Burton returned to the franchise with Batman Returns; while it still raked in the dough, it didn't do as well as the first, thanks to the considerably Darker and Edgier tone that more than a few Moral Guardians deemed unfit for a movie that they perceived to be aimed at children — since it was, after all, a comic book movie. Keaton was initially attached to what became Batman Forever and even did some costume testing, but when Warner Bros. demoted Burton to producer and Keaton looked at the Lighter and Softer screenplay that got the thumbs-up from new director Joel Schumacher, he left the franchise and was replaced by Val Kilmer. Nowadays, in the wake of other actors leaving their mark on the Dark Knight's legacy, Keaton is still very fondly remembered as one of the best to inherit the role, with fans even going as far as to hope for a live-action film adaptation of Batman Beyond with Keaton as the elder Bruce Wayne.

He's also dabbled in directing, with his first film The Merry Gentleman appearing at the Sundance Festival in 2008, and he's done a few small other things since then; including being the executive producer for the films The Last Time - in which he also starred - and Body Shots, as well as performing the songs "Don't Lose Your Faith

" (which he also wrote the lyrics to) and "Frosty The Snowman

" from the soundtrack for Jack Frost.

With no signs of retiring any time soon, Keaton is keeping his roles diverse by alternating between comedy and drama, and he lent his vocal talents to a Ken doll in Toy Story 3. Keaton's appeal is best described in this article

He made a major comeback with the critically acclaimed Birdman or (The Unexpected Virtue of Ignorance), with many people calling it the best movie of 2014, and saying Keaton should have gotten the Oscar for Best Actor. In fact, it was nominated for nine Oscars, with Keaton getting a nom for "Best Actor;" the film has won over a hundred awards, including the Best Picture Oscar. He cemented his comeback with a leading role in Spotlight the following year, which also won the Best Picture Oscar. He returned to the world of comic book movies in 2017 by playing another birdman — the Vulture — in Spider-Man: Homecoming.

, as he maintains it's still his favorite role of all time; unfortunately, nothing more seems to have come of it

, and the sequel was long trapped in Development Hell — until 2022, when it was announced that

the film would begin production that year. That said, if all goes to plan

, he appears to be on track to reprise his other best-known role — that of Tim Burton's Batman — in the upcoming The Flash movie, 30 years after he last wore the cape and cowl with increasingly plausible suggestions that he could be playing the aforementioned role of elder Bruce Wayne in a film adaptation of Batman Beyond as well.

Batman makes a strong gesture to demonstrate his love for Catwoman.

Batman makes a strong gesture to demonstrate his love for Catwoman.