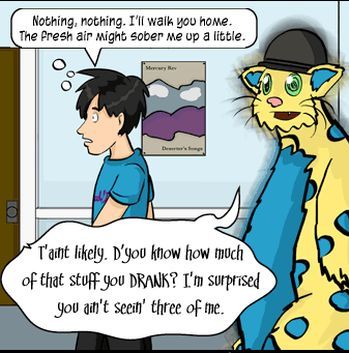 The Beast of Bourbon. ♪ "Ain't I drunk enough?" ♪
"The man whom we all know, stupid, unimaginative, whose brain is bitten numbly by numb maggots; who walks generously with wide-spread, tentative legs, falls frequently in the gutter, and who sees, in the extremity of his ecstasy, blue mice and pink elephants."
— Jack London, John Barleycorn
Advertisement:

"Pink Elephants" is a common way to refer to alcohol-related hallucinations. The term was originally coined by Jack London — himself a famous drinker — in his autobiographical novel John Barleycorn. It is now widely used to refer to any sort of alcohol-related hallucinations — even those that don't involve elephants of any color. (If a work has someone hallucinating actual pink elephants, it's probably a comedy exercising the Rule of Funny.)

What the stereotypical hallucination is likely to be varies culturally; drunk Americans tend to see pink elephants or snakes, Germans see white mice, and Russians have green imps. In Real Life, alcohol-related hallucinations are most commonly associated with "the DTs" (delirium tremens), which is a withdrawal symptom experienced by severe alcoholics, not a direct effect of the alcohol itself. In fiction, however, it's common to suggest that extremely strong drink will cause people to see hallucinations. There is a grain of truth to this—severe alcohol poisoning can cause hallucinations. But this is rare. Except in fiction.

A subtrope of Mushroom Samba, which covers hallucinations caused by drugs in general. May overlap with Marijuana Is LSD, which is about unrealistic depictions of drug effects. Compare with Single Malt Vision, where alcohol affects sight, but does not cause actual hallucinations.

Should not be confused with literal pink elephants which can occur in Real Life as a result of albinism. A drunk character who sees them may mistake it for this trope, causing that character to swear off drinking. Can combine with You Have to Believe Me! or Crying Wolf (if the drunk person routinely claims to see pink elephants, and now there's one in the person’s backyard).