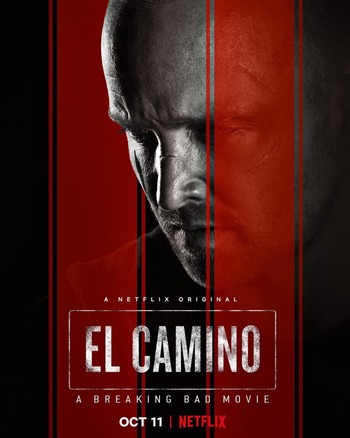 The only way forward is to leave his past behind.
"No way I'm helping you people put Jesse Pinkman back inside a cage."
— Skinny Pete
Advertisement:

El Camino: A Breaking Bad Movie is a Netflix original film and sequel to the AMC crime drama series Breaking Bad. It was released on October 11, 2019, approximately six years after Breaking Bad concluded in 2013.

Set immediately after the events of the final episode "Felina", the film's story focuses on the continued exploits of Jesse Pinkman (Aaron Paul), the former partner-in-crime of schoolteacher-turned-drug-lord Walter White (Bryan Cranston). After spending several months in captivity as a slave laborer by a Neo-Nazi street gang, Jesse escapes but is not quite free yet, as he is now wanted by law enforcement for the critical role he played in Walter's meth production and trafficking operation. While figuring out how to flee New Mexico in hopes of starting a fresh new life elsewhere, Jesse must come to terms with all the traumatic memories he experienced in his old life of crime.

For a full plot summary of El Camino, please see this page (beware, all spoilers on that page are completely unmarked).

The tropes below contain unmarked spoilers from all previous episodes of the Breaking Bad series. You have been warned.

♫ Cause I know (Dreams are for those who are asleep in bed)
And I know (It's a sin putting words in the mouths of the dead)
Cause I know (For all my ruminations I can't change a thing)
Still I hope (There's others out there who are listening)
To the static on the radio... ♫