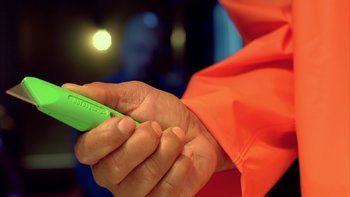 Gus prepares to make some cuts to his workforce.
"Well? Get back to work."
— Gus Fring
Advertisement:

The Cold Open is a flashback to when Gus, Gale and Victor were setting up the super lab. Gale mentions a sample of 'blue sky' Gus had asked him to test. He says that he could not produce meth of such high purity, and convinces Gus, against his better judgment, that the 99% purity of the sample is worth whatever risks might come along with the person who cooked it.

Back in the present, Jesse is seen standing in Gale's doorway after shooting him. He slowly leaves in a daze. Victor arrives shortly after, pushing through a crowd of neighbors to see Gale, dead on his floor. He goes outside to find Jesse sitting motionless in his car, and takes him back to the lab. In the super lab, Walt and Mike stare one another down before Victor arrives with Jesse and delivers the news that Gale is dead. While Victor destroys lab equipment in frustration, Mike makes the call to Gus as Walt sits apprehensively hoping that his plan has worked. Mike also learns Victor was seen at Gale's apartment. Back at the White house, Marie drops in to say hi to Skyler and notes that Walt's car is in the driveway, assuming a reunion. Skyler, unaware of this, drives the car to another street so Jr. will not see it.

At the lab, Walt explains to Mike and Victor that he is now the only available cook, and that they need to stay on schedule. Victor responds by beginning the meth cooking process, claiming he knows all the steps from watching Walt for so long.

Skyler attempts to locate Walt by speaking with a paranoid Saul Goodman, who has hired a bodyguard, Huell, in case of fallout in the Gus/Walt feud. With no other options, Skyler goes to Walt's apartment and calls a locksmith, faking a panic attack and purse robbery so that he will let her in. Inside, she finds nothing that tells her where Walt is, but chances upon the glass teddy bear eye from the plane crash.

Marie returns home to congratulate Hank on his work in physical therapy while recovering from the cartel's attack. Hank is cold and disparaging to her and claims he hadn't made any impressive progress at all. Humiliated, he asks Marie to help him use his bedpan.

As Victor continues his cook, Walt's superiority lessens when Victor remembers a key step in the process. Jesse remains completely silent and motionless. Then Gus enters the lab, to Victor's delight and Walt's dismay. As Gus silently walks down the stairs, changes out of his suit and tie and puts on a bio-hazard outfit, Walt begins rationalizing his actions as necessary steps to defend himself, growing more panicked as Gus continues to dress. Finally, Gus selects a box cutter from the tool bench, the same used by Gale in the Cold Open to open boxes of lab equipment, and looms over Walt and Jesse as they both wait for his next move. Gus then steps across and cuts Victor's throat, spraying blood over Mike, Walt, and Jesse and shocking all three. A nauseated Walt cannot meet Gus' eyes, while Jesse furiously stares him down like a cornered dog. Gus calmly drops the box cutter, washes Victor's blood off, gets dressed again, and prepares to leave, but not before uttering a single line: "Get back to work."

Walt and Jesse mop up the blood, and with Mike's help, dispose of Victor's body, his gun and the box cutter in one of their hydrofluoric acid barrels. Later, Walt and Jesse eat breakfast at a Denny's, and a paranoid Walt discusses what their next move against Gus should be. Jesse appears totally detached and unconcerned, seeing their lives as safe for the time being because Gus does indeed need them, reluctant though he is to keep them around. Nonetheless, Gus' warning to them with Victor's demise was loud and clear to him: if Gus can't kill them, he can at least make them wish he had.

As Walt returns home to find his car gone Skyler greets him, tells him where it is, and asks if all is well. Walt responds affirmatively, but walks off with an uneasy look in his eye. Before the credits roll, we see a glimpse of the crime scene at Gale's apartment, police investigating, and Gale's lab notebook sitting in full view on a coffee table.