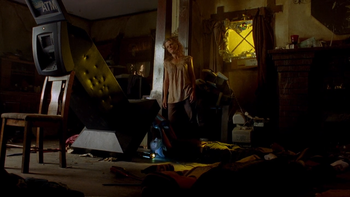 "I ain't no skank."
"You give me one hit, and I’ll be any kind of mother that you want."
— Spooge’s Woman
Advertisement:

After Skinny Pete got held up for his dope and money by a couple of methheads, Jesse has him find out more information about them so he can get back what was stolen. According to Pete's investigation, while there is little known about the woman that got him mugged, the man was known as "Spooge". With their home address, Jesse sets out to take back what is his.

When he enters Spooge's house, he finds the interior a complete mess, but there is no sign of Spooge or his girlfriend. He does find a young redheaded boy, filthy and dressed in ragged clothes, watching an infomercial on the TV (for lack of any other channels). Jesse decides to wait in the house with the young boy until Spooge and his girlfriend returns...

Meanwhile, Walt has returned to work at school for the first time since his cancer diagnosis. Back at home, Skyler receives a call from Gretchen, the conversation turning to the money that Gretchen and Elliot had supposedly given them to pay for Walt's medical bills. Gretchen is confused as Skyler tearfully thanks her for money she never actually offered. Curious, she decides to pay the Whites a visit.

When Walt and Junior return home from school, they find Gretchen's car parked outside their home. Gretchen is inside talking with Skyler, but she suddenly becomes on guard when Walt enters. She hurriedly excuses herself. Walt meets Gretchen outside as she is preparing to pull out, and asks her not to say anything to anyone until he can clear the air...

Back at Spooge's house, Jesse continues to watch infomercials with the boy until he hears screaming coming from outside: Spooge and his girlfriend are returning. Jesse places the boy back in his bedroom, then intercepts his parents in the kitchen, pistol-whipping Spooge and holding the two at gunpoint. From them, he manages to get back some of his meth, but no money. Spooge, however, explains that he has the money: he and his girlfriend had managed to steal an ATM. Described as a "victimless crime" by Spooge (an obvious lie; a man was killed lifting the machine), he plans to break open the ATM, so everyone can take the money inside.

Unfortunately, in spite of having boosted many ATMs before, Spooge never got a single one open, a fact sadly demonstrated by his futile attempts to break it open with a sledgehammer.

At a high-end restaurant, Walt meets with Gretchen. Gretchen wants Walt to explain why he would lie about her and Elliot paying for his medical bills, but Walt remains evasive, apologizing for his lies and asking Gretchen to let him explain in his own time. The discussion becomes heated as Walt later accuses Gretchen and Elliot of having cut him out and made their fortunes off of his hard work, while Gretchen fires back that Walt had abandoned them and walked out on her without a word when they had visited her family one Fourth of July weekend. Gretchen is at a loss for words, save for how sorry she feels for Walt. Walt fires back with a simple reply, quiet and two words long, but vicious: "Fuck you." Gretchen, incredulous, can do naught but silently and hurriedly leave.

When Walt returns home, Skyler questions him about what has happened between him and Gretchen. Gretchen had called, hurriedly telling her that she and Elliot could no longer pay for Walt's medical bills, then refusing to answer any calls Skyler made to them, making her suspicious. Walt manages to assuage her suspicions by explaining that, while he had talked with Gretchen, he had learned that they are broke: they couldn't pay for his bills anymore because they no longer had the money to spare. Skyler finds this odd, since Gretchen still drove a nice car, to which Walt explains that she's just keeping up appearances.

Back at Spooge's house, Spooge's girlfriend knocks Jesse out when her son comes out of his room and distracts him, then takes Jesse's gun and meth. When Jesse comes to, he finds Spooge attempting to break into the ATM from underneath with a power drill. His girlfriend, who also abuses heroin, asks Spooge for some meth to "even out", but an angry and irritable Spooge refuses, calling her a "skank" in the process. The woman demands an apology for calling her a skank, but Spooge fires back by calling her a "skank-ass skank" repeatedly.

At her wits end, she whispers "I ain't no skank", then pushes the ATM onto Spooge's head, crushing it and killing him instantly, shocking Jesse. Moments afterward, the vault of the ATM pops open, cash spilling from it. Jesse takes what money he can carry, then, while Spooge's girlfriend falls asleep, calls 911, and leaves the phone hanging while he takes the boy outside, covering him in a blanket and shielding his eyes from the sight of Spooge lying in a puddle of blood. He places the boy on the front porch, begs him not to go back inside, and says his goodbyes as he leaves while the sound of sirens grow closer...

"You have a good rest of your life, kid."