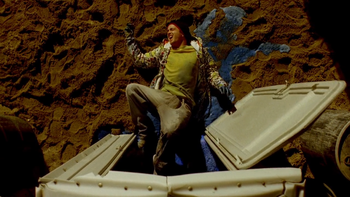 "Why are you blue?"
"Okay, so while you’re fixing fences, what about me, huh? Your A-hole brother-in-law took all my money."
— Jesse Pinkman
Advertisement:

At a convenience store, Walt and Jesse meet. Jesse asks for his half of their meth sales, but Walt chastises him, stating that he shouldn't have to pay for his carelessness before giving a destitute Jesse a small portion of their sales: $600.

As Walt tries to cook dinner and explain away the second phone by claiming he had mistaken an alarm on his phone to remind him to take his meds for an incoming call, Jesse attends a meeting with his parents. A lawyer is present, and states that Jesse is being evicted from his house and had seventy-two hours to vacate the premises. His parents tell him about Hank's visit and how it has burned their last bit of patience with him, but Jesse tries to explain it away with spinning a tale that he is actually working for the DEA. Jesse's mother calls him on this, saying that she found the meth lab he kept in the basement, and under federal law, authorities could've seized the house.

The following day, Jesse is awakened by his distraught mother to find movers taking away his furniture. Jesse is outraged, insisting that Aunt Ginny bequeathed him the house fair and square, because he was the only one who was willing to take care of her while she was sick and dying, even when everyone else in the family had abandoned her, including his mother. Provoked, Jesse's mother slaps him, then says that she just wants him to turn his life around.

Walt continues to try and bridge the rift that formed between himself and Skyler, but to no avail. Jesse calls him and begs for help after his housing situation went "completely testicular", but Walt is not interested in his problems.

Jesse's attempts to find housing among his friends, old and new, fall flat. With his motorcycle and his scant few belongings stolen afterwards, he is left with little choice but to break into Clovis's junkyard, falling into a port-o-potty along the way, and sneak into his RV for shelter.

As Walt tries to bond with Junior by giving him driving lessons, Clovis finds Jesse in the RV and threatens him with a shotgun. Jesse states that he doesn't have the money to pay him back, but that he would make good on his promise. Clovis, however, is not interested in excuses: he plans to sell the RV and Jesse's meth paraphernalia. As he calls around to find a buyer, Jesse sneaks back into his RV, turns it on, and makes his get-away.

Walt, still trying to mend his relationship with Skyler, apologizes to her for his cancer and not being a better husband. Skyler, however, is not interested in his excuses, and demand he say something to her that is not "complete bullshit". When Walt claims he doesn't know what she wants him to say, Skyler leaves in a huff.

Jesse arrives shortly thereafter, and Walt goes off on him, calling him a miserable junkie. Jesse begs for his half of the meth sales, but Walt, his nerves raw from his inability to reason with Skyler, absolutely refuses to give Jesse his share, berating him and calling him stupid. The two get into a fist fight, with Jesse quickly gaining the upper hand. Jesse ends up pinning Walt down, and is poised to pound his face in, but when Walt tells him to finish the job and kill him, Jesse relents. Exhausted, the two go back inside Walt's house, where Walt reluctantly splits his money 50-50 with Jesse (though he covertly keeps an extra stack of bills for himself), before offering to make him breakfast.

All the while, Skyler drives to a gas station. She begins lighting up a cigarette despite being pregnant. She notices a woman parked next to her looking at her and disapprovingly shaking her head. Skyler just shoots back a withering glare at her and starts to smoke...