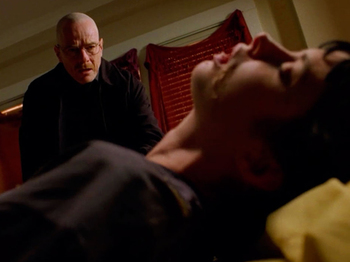 Heroin. Not even once.
"Family? ... You can't give up on them. Never. I mean, what else is there."
— Donald Margolis
Advertisement:

Walt manages to barely make the deal, offloading his meth in exchange for over a million dollars. He then makes his way to the hospital, where Skyler is lying, holding their newborn daughter, Holly White. Walt is beside himself with joy at his daughter's birth, but also guilt for not being able to be there for when she was born.

The following morning, Jane awakens when she hears her father calling for her. She notes to a groggy Jesse that someone broke in as she leaves for her support group. After a moment, reality hits Jesse, and he panics, scrambling to his kitchen and finding the meth he was keeping there was gone. He calls Walt at his house to note the meth was gone. Walt begins to berate Jesse for calling his home phone and being out of it at time where he really needed him, but he quickly gleams from Jesse's panicked tone that he legitimately doesn't remember him breaking into his house and shaking the information about the meth's whereabouts out of him. Still very angry with Jesse, Walt decides that he is in no hurry to tell him what actually happened and just gives him the silent treatment and eventually hangs up on him without any further words. This just freaks Jesse even more out, as he takes Walt's unresponsiveness as a sign that he is seriously mad at him. Jesse angonizes for a bit over what Walt might to do to him for losing the drugs, before he notices that he has several missed calls from him in his voicemail's inbox.

That evening, the Schraders come bearing dinner: Los Pollos Hermanos chicken, to Walt's apprehension. Skyler announces her plan to go back to working at Beneke's so that she can help Walt afford his upcoming surgery. After the party, Walt takes Holly to the garage, where he shows his newborn daughter the cash he had hidden away in the house, money that he earned for her...

The next day, Jesse storms into Walt's classroom after school, chewing him out for let him stew in his own paranoia, instead of just telling him that he had picked up the drugs and made the deal. He also demands his cut of the money earned from selling the meth to Gus. Walt refuses: Jesse's being high on heroin caused him to miss the birth of his daughter just so he could make the trade. He also says that he doesn't find it safe to give him any large sums of money when he is actively taking a highly addictive drug, saying that he will have no part in letting him kill himself by shooting all the money straight into his arm. When Jesse claims he's not using anymore, Walt doesn't trust him: he gives Jesse a beaker to urinate in so he could test for drugs. When Jesse hesitates, Walt mocks Jesse and his "junkie girlfriend", infuriating Jesse who defiantly throws the breaker at Walt and walks out without any further words.

At home, Skyler shows Walt a secret project his son was working on: SaveWalterWhite.com, a webpage where visitors could donate to Walt's surgery. Walt is reluctant to let this project go on, both out of pride and out of concern for his meth business, but relents when Skyler pulls him aside and tells him that it Junior spend a lot of effort on it and would be crushed if he was forced to take it down.

Walt vents about the website to Saul afterwards, but Saul sees a perfect opportunity in the site: it can be used to launder Walt's drug money. All he has to do was get in contact with a hacker in Belarus, so he can use a botnet to trickle money into the donation website as donations from several unwitting people's computers. Walt agrees to the plan, but resents how he will never be able to let his family know that he was the one who earned the money that was now being donated.

Jesse, meanwhile, vents to Jane about Walt as he prepares a meth/heroin speedball for himself. As he dozes off from the drugs taking effect, he mentions that Walt owed him over $480,000. Jane is surprised that Jesse could have so much money, and makes plans to secure it for them both.

The following day, Jane's father, Donald, notices she isn't attending her meetings. He arrives at the duplex and finds Jane was sleeping with Jesse, who is sleeping in a room littered with drug paraphernalia. He angrily demands Jesse leave and prepares to call the police so Jane could get clean in prison. Jane pleads with Donald to let her check into rehab the next day. Reluctantly, Donald agrees to Jane's request. After Donald leaves, Jane confides to Jesse that if they had money, they could do whatever they wanted...

Jane calls Walt, getting past Skyler by claiming to be a former student looking for a recommendation letter. When Jane explains that she is calling on behalf of Jesse to demand the money he is duly owed, Walt is outraged at her, both for her daring to call his home phone and for making demands of him. He says that he will give Jesse his money, but not a moment before he can prove that he is clean. Provoked, Jane decides to go for direct, instead of implied extortion: give Jesse his money, or she will reveal the fact that this mild-mannered high school teacher, with a brother-in-law in the DEA, was in the drug trade.

That night, when Skyler sends Walt to get diapers, Walt puts Jesse's cut of the money in a duffle bag and drives out to his duplex. He hands a shameful Jesse the bag and tries to talk him out of ruining his life, but Jane slams the door in his face. With over four hundred grand, Jane rejoices that they could go anywhere, do anything, be anyone. She and Jesse plan to run away to New Zealand and start a new life and get clean.

Unfortunately, their addictions prove too powerful...

A saddened Walt stops at a bar, where he meets Donald. Not realizing this man is Jane's father, the two talk about their children. Donald mentions having a daughter who is a handful, and Walt talks about how he has a "nephew" who is also a pain in the ass, refusing to take his advice even when it's for his own good. He asks Donald for his advice, to which Donald tells him that he can never give up on family.

Taking the advice to heart, Walt returns to the duplex. When Jesse doesn't answer, he breaks in again. He finds Jesse passed out from heroin and attempts to awaken him, but to no avail: he is out cold.

Just then, Jane begins to convulse and vomit. Walt had accidentally rolled her onto her back when trying to rouse Jesse, and in this position, she begins to choke on her own vomit. Walt initially rushes to help her, but he hesitates, and considers it for a moment. He then stands back and watches in silence as Jane struggles to breathe before she finally lies still, her lifeless eyes rolling open. Horrified by what he has just done (or rather, didn't do), Walt tries to compose himself as a tear runs down his cheek, but his face soon hardens. After all, with Jane out of the picture, so is her sway over Jesse and the threat of her blackmailing him...

"This is blackmail. Do right by Jesse. Tonight. Or I will burn you to the ground."