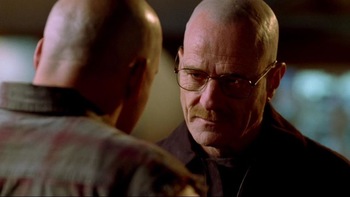 ♫ But this is beginning to feel / like the dog wants a bone... ♫
"Um...well, it's kind of funny. When I got my diagnosis – cancer – I said to myself, y'know, "Why me?" And then, the other day when I got the good news, I said the same thing."
— Walter White
Advertisement:

Walt meets with Jesse at a restaurant to discuss their plans and Walt's treatment. Jesse is excited at the news of Walt's cancer going into remission, and Walt explains that after they sell off the forty-seven pounds of meth they cooked up, he would retire.

A party is held for Walt to celebrate his remission. All throughout, however, Walt feels awkward and depressed. As he drinks, he begins to offer Hank and Junior, only 16, tequila. Hank goes along with Walt offering his son alcohol at first, but becomes worried when Walt continues to fill Junior's glass and forces him to drink. Hank decides to take the bottle away, but this causes Walt's temper to flare. Tensions build between Walt and Hank, but are dispelled when Junior, unable to hold his liquor, starts to vomit into the swimming pool.

As Walt tries to make amends for his behavior during the party and buys a new water heater for his family, Jesse and Jane look over Jesse's drawing of superheroes that he made as a kid, with Jane noticing that each hero Jesse drew was essentially an idealized version of himself. When she hears a knock on her door, however, she rushes out of Jesse's backdoor and sneaks back into her own home to answer. The man knocking on her door is her father, Donald Margolis, come to pick Jane up for a Narcotics Anonymous meeting. When Jesse steps out to see what's going on, Jane takes a moment to introduce her father to Jesse, her "tenant". After she returns home, Jesse asks about the "total diss" he felt Jane made to him. Jane tried to explain that she was doing Jesse a favor, that her father would not take kindly to learning she was sleeping with a tenant who also smoked weed. Jesse explains that it's not just about her father, but about himself and Jane, "You and me". When Jane asks "Who's 'you and me'?", an exasperated Jesse leaves to smoke some meth. After he returns home, Jane slides something under his back door. It's a drawing of a superheroine named "Apology Girl", who looks much like an idealized version of Jane. This gesture leaves Jesse smiling.

As lingering feelings begin to build between Skyler and Ted Beneke, Walt goes to a hardware store for supplies in his latest project; replacing the rotting boards in his house. He notices one of the customers there had a basket filled with acetone, lye, and other materials for cooking meth. He quietly gives the owner of the cart advice on how to conduct their business, spooking him. Later, Walt steps out to find the would-be meth cook and his friend. He approaches them, stares them dead in the eye, and gives them a simple instruction, to which they fearfully comply:

"Stay out of my territory."

"Stay out of my territory."