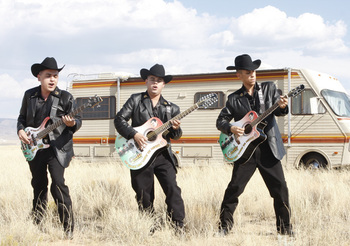 "But that homie's dead/He just don't know it yet."
"Hola DEA!"
— The Cartel, through Tortuga and his tortoise
Advertisement:

Walt visits Jesse's apartment to discuss the matter with Spooge. He bangs on his apartment's door, attracting the attention of Jane, who mistakenly believes Walt is Jesse's father who kicked him out of his old house. Jesse eventually opens the door and invites his "Dad" in. Walt chastises Jesse for supposedly killing Spooge and lighting up pot afterwards, but Jesse explains that Spooge's drugged-out girlfriend was the one who did him in, and he had been smoking weed to cope with Spooge's nauseating demise.

Since Jesse is too distraught after his encounter with Spooge, Walt goes out to conduct business with Badger, Skinny Pete, and Combo as "Heisenberg". From them, he learns that business is going smoother than usual, due to everyone believing Jesse killed Spooge: everyone was fearful of the wrath of Heisenberg. Walt plays along with the rumor, and when he returns to Jesse, tells him to roll with it, too: he explains that Jesse is a "blowfish" who looks intimidating when threatening, and Jesse gets on board with the idea of using his newfound street cred to expand their territory.

Meanwhile, Skyler applies for a data-entry job at Beneke Fabrications, using her friendship with the owner Ted Beneke to get her old bookkeeping job back. Marie is disgusted that her sister is taking a job with "Mr. Grabby Hands," but Skyler waves her (and Walt, who thought she quit due to welding fumes) off. At the same time, Hank meets with "Tortuga" (Danny Trejo), a cartel informant, in El Paso. He is annoyed with his colleagues acquiescing to his every request and demands Tortuga cooperate, but Tortuga explains that he's a patient man and he will take his time to get what he wants.

While Jesse and Jane bond, Hank meets with his colleagues on the Mexican border as they conduct a stakeout. He sees something in the distance: it appears to be Tortuga. When the team investigates, they discover that it's actually Tortuga's severed head attached to the back of a tortoise (Tortuga's Spanish namesake) with "HOLA DEA" ("Hello, D.E.A.!") painted on its shell. Hank begins to feel ill as his colleagues laugh about the poetic justice that had been wrought on Tortuga, but the laughter comes to an end with bombs attached to the tortoise go off, killing one DEA agent and maiming three others (and the tortoise).

Jesse meets with his friends for the first time since dealing with Spooge. Playing on the street cred he built up, he tells them that they are now the kingpins of ABQ and can sell wherever and whenever they want. He also plans to increase the scale of their operation, and instructs the three to recruit their own dealers so they can expand their operation and increase their profits. Even this isn't enough for Walt's tastes: "Corner the market, then raise the price. Simple economics."

Back home, Jesse admits to Jane that, despite the name he gave on his lease, his last name is actually "Pinkman", not Jackson; and Walt wasn't really his father. Jane, however, respects Jesse's privacy, stating that she doesn't care what he does, so long as he doesn't do it in the duplex. The two celebrate Jesse getting a flatscreen TV and, while waiting for the TV to acquire a satellite signal, hold hands...

"What's the matter, Schrader? You act like you never saw a severed human head on a tortoise before!"