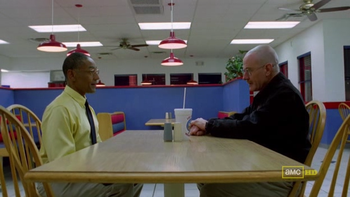 Walt talks about a certain "job" with the owner of Los Pollos Hermanos, and it's not frying chicken.
With their drug enterprise growing exponentially, Walt and Jesse start expanding into new territory in Albuquerque. Combo is conducting his business one day when he notices a pair of suspicious men eyeing him. He calls Skinny Pete and asks him to come help. Before he knows what's going on, however, he is shot to death by a young boy on a bicycle at the behest of the suspicious parties.

Walt and Skyler visit the doctor, who tells him that his tumor has shrunk enough that he can undergo surgery to have it removed. The surgery is risky, but without it, the tumor would eventually regrow. As such, Walt decides to go through with it, even though the surgery is costly.

Meanwhile, Jesse is struggling with the death of Combo. Skinny Pete believes their aggressive expansion played a large role in Combo's demise. Combined with Pete's probation and the fact that Spooge's girlfriend confessed to killing him, thus destroying Jesse's street cred, Pete opts out of the business.

Walt and Jesse meet with Saul, and the two get into an argument over who is at fault over Combo's death. Saul stops the bickering with a proposal: he has connections to a local businessman who is willing to buy Walt's product in bulk for a kingly sum.

That evening, Jane visits Jesse. Jesse asks her to leave, however: he admits that he's going to smoke some meth and doesn't want her around so she won't relapse. Jane suggests he join a support group, but Jesse refuses. Jane begins to leave, but ultimately decides that she prefers Jesse's company to sobriety and stays with him...

The next day, Walt and Jesse meet at a fried chicken restaurant, Los Pollos Hermanos, to meet with the businessman. Jesse, high and high-strung, is not enthused with the idea of meeting with a mystery benefactor and leaves. Walt stays behind to wait for the contact, but he never arrives...

As old flames are stoked between Skyler and Ted at his birthday party, Walt calls Saul, who informs him that the deal with the businessman was off: he didn't like what he saw and wanted nothing to do with him. Saul offers to look for other offers, but Walt persists on meeting with this businessman.

Walt returns to Los Pollos Hermanos to await the businessman again. As the day draws on, he begins to realize that the mild-mannered manager, Gustavo Fring, may be the man he is looking for. He asks Gus to sit down with him to discuss business. Gus denies that he is Saul's contact at first, but Walt presses on, stating that he understands Gus's hesitance, both of them being cautious men. Gus finally dispenses with the masquerade and corrects Walt, stating that he is not cautious for associating with a drug addict in his business. Walt assures Gus that he doesn't need to worry about Jesse; drug addict or not, he can trust him. He touts his product and offers to sell him his entire batch, a whopping thirty-eight pounds, at any moment.

Back at Beneke Fabricators, Skyler points out inconsistencies in Ted's financial reports. Ted tries to downplay the inconsistencies, but when Skyler presses him, he admits to cooking his books and committing fraud to keep the company from going under. Taken aback, Skyler states that even though she won't report Ted's activities to the police, she would not be party to his crimes.

At school, after a test, Walt checks his texts on his hidden second cell phone. He received a message from "POLLOS". He goes to the restaurant to meet with Gus, but learns that Gus isn't the manager of this restaurant: he owns the entire chain. An underling of Gus, Victor, approaches Walt with his instructions: thirty-eight pounds, truck stop, one hour. Make the delivery, or don't come back to the restaurant.

Walt rushes to Jesse's house, attempting to call him on his phone, but to no avail. When he arrives, he knocks on his door, but no answer. Desperate, he breaks in through his back door. He is horrified to find Jesse and Jane passed out, high on a speedball of meth and heroin. Even though Jesse is high as a kite and barely aware of his surroundings, he does tell Walt that their product is under his kitchen sink.

Walt ignores his phone ringing as he packs the meth into a trash bag. He eventually reads a text that Marie sent him: "BABY COMING!" Walt is torn between his desire to see the birth of his daughter and the need to complete his transaction. Ultimately, he decides to take the meth and head off to make the sale.