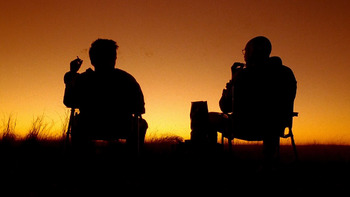 ♫ Cause when the war is over / The fight is done / We'll be lying in the sun... ♫
Walt: I have it coming. I deserve this.
Jesse: Snap out of it. All right, first off, everything you did, you did for your family. Right?
Walt: All I ever managed to do was worry and disappoint them. And lie. Oh God, the lies...I can't even...can't even keep them straight in my head anymore...
Advertisement:

Walt undergoes a combination of chemo and radiation treatment to shrink his tumor. He won't know the results of his treatments for four days, though, and he is left to dread the outcome as the scan of his chest reveals a large white spot on his lung...

At Saul's office, Walt receives a crash course in money laundering, a practice that Saul is exceptionally good at. After the costs of dealing with Badger's arrest, Walt is left with only about ten grand. Convinced that he may not have long to live, Walt decides to cook one more time to ensure he has something to leave behind for his family. To that end, he tells Skyler that he plans to visit his mother, to ensure that she can leave something for Skyler should the worst come to pass.

On Saturday morning, Jane suggests taking Jesse to an art museum. Jesse is on board with the date, but Walt throws a wrench into his social life, telling him that they are to do nothing but cook until Tuesday. Jesse balks at the idea, but eventually agrees when Walt explains that the methylamine is losing its potency.

Skyler drops Walt off at the airport that afternoon. After she leaves, Jesse picks him up in his RV, and the two drive out into the desert. Over the next two days, the two cook nonstop from dawn to dusk. They manage to cook up forty-seven pounds of meth, which would earn them well over half a million dollars each (approximately $400,000 each after paying Saul). Walt is determined to continue cooking, but Jesse, exhausted from working without rest, proposes taking the night off, checking into a motel, and having a meal at Denny's. Walt agrees to the break, but before they can depart, the battery in the RV dies: Jesse had left his key in the ignition for the last two days, draining the battery's charge, leaving Walt extremely cross.

The two try to use gas from the RV's tank to refuel the generator that powered their cook so they could jump-start the engine, but Jesse accidentally spills gasoline over the generator and causes it to burst into flames when he tries to power it up. Walt runs back into the RV to get the fire extinguisher, but Jesse dumps their remaining drinking water on the generator before he can put out the flames.

Now stranded in the desert, Jesse tries to get a cellphone signal on his phone to contact Skinny Pete for help, but to no avail. Walt's phone has a signal, but he is reluctant to use it since he suspects Skyler checks his call logs. He eventually relents and lets Jesse call on his phone, so Jesse can give Pete directions to their location. Unfortunately, Pete gets lost, and the phone dies when Jesse tries to redirect him.

The following morning, Walt tries to trickle-charge the RV's battery by hand-cranking the generator. Jesse realizes Walt lied about the methylamine spoiling. The process is slow and exhausting, leaving Walt weak and coughing blood, and ultimately proving fruitless as the engine fails to start. Walt falls into depression, stating that he deserved to die for all of the lies he told to cover his illegal activities. Jesse begs Walt to stop being pessimistic and think of something scientific that will get them out of their predicament.

Walt eventually comes up with one idea: a mercury battery using coins, galvinzed metal, and chemicals. The idea actually works, and the RV comes to life once more. Jesse drops Walt off at the airport afterwards, promising to make sure his family got their share of the profits.

Four days after embarking on his biggest cook yet, Walt visits his doctor with his family to get the results of his medical examines. To everyone's surprise, the tumor had shrunk by eighty percent! The white splotch on his scan? Just inflamation from the treatments. His coughing up blood? A rupture in his esophagus from all of his coughing, which can be treated.

After getting the good news, Walt goes to the restroom. As he leaves, he sees his reflection in a paper towel dispense. In anger, he punches his reflection, bruising his knuckles...

Example of:
What an Idiot!