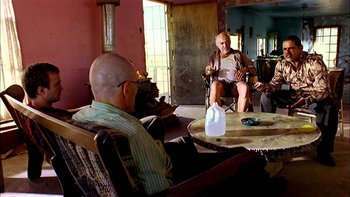 Tuco has his "business associates" over for lunch.
*Ding*
— Tio Salamanca
Advertisement:

Tuco, having abducted Walt and Jesse at gunpoint, takes them with him to the residence of his uncle, Hector Salamanca, near the Mexican border, where he tells them about his plan: namely, that he wants to bring Walt with him south of the border to forcibly employ him as his main meth cook. Walt is, of course, not thrilled about this, and neither is Jesse, as Tuco sees him as an expendable part of the plan.

At the DEA's offices, Hank briefs his colleagues on the status of Tuco's crumbling drug empire; the DEA has managed to effectively dismantle the organisation, and only needs to arrest one last suspect, Tuco himself. Despite assuring his team that they will find him, he privately remarks to Gomez that Tuco in all probability is already out of their reach across the border.

Hank then goes to meet with the rest of Walt's family, who are searching for Walt after he went missing last night. Skylar speaks about Walt's strange behavior and the phone call he got last night. After a bit of pushing from Marie, Hank reluctantly admits that he checked up on said phone call, and that no record of it exists, meaning that Walt must have a second phone and therefore must be keeping some kind of secret from the family. Skyler wonders if this secret has something to do with Walt's disappearance, and Marie mentions to Hank that Walt recently had been buying pot from Jesse in the past and wonders if this is the secret Walt is trying to hide. Hank promises to check up on Jesse and ask him if he knows anything about where to find Walt.

Walt and Jesse, meanwhile, try to figure out a way to kill or incapacitate Tuco so they can make their escape. To make matters worse, Tuco believes that Gonzo is the guy who ratted him and his gang out, and Walt fears that the moment that he finds out the truth — that Gonzo is actually dead — he will no doubt blame either Walt or Jesse for his downfall. On top of that, Tuco's cousins will be joining up with him in a few hours, meaning that however they are going to get rid of Tuco, they have to do it quickly.

Having kept the bag of meth poisoned with ricin in his pocket, Walt attempts to coax the constantly drug-snorting Tuco into taking some of it. Tuco, however, notices that the sample smells weird. Jesse quickly improvises a sales-spiel and manages to convince the skeptical Tuco that it's a new special recipe of Walt's, but makes a mistake as he says that it contains chili powder. Tuco scoffs at this, and commenting that he hates chili, he decides to leave the bag alone.

Hank starts his search for Jesse by visiting his parents. Mrs. Pinkman is worried that Jesse is in trouble with the law, but Hank assures her that his reasons for wanting to talk with her son are purely private. She informs Hank that Jesse no longer lives with her and her husband, and directs him to his current address, the house of Jesse's aunt. Being unable to find Jesse there either, Hank decides to check up on his car, since Mrs. Pinkman told him that Jesse drives a red Monte Carlo that he converted to a lowrider. He calls Gomez to find out if Jesse installed a LoJack car-tracking system, and, if so, to try to get a fix on the vehicle's location.

Walt now tries to sneak the poisoned meth into Tuco's food, but Tuco's uncle, Hector, interferes and knocks the plate off the table. Noticing his uncle's strange behavior, Tuco tries to ask him what is wrong, and Hector, despite being old, wheelchair-bound, and only capable of communicating by ringing a bell, manages to convey to Tuco that Walt and Jesse are up to no good. Furious, Tuco grabs Jesse and drags him outside, overhearing Walt's protests and pleas for Jesse's life. Pointing a gun at Jesse, Tuco demands that Walt tell him what he is up to. Noticing that Jesse is about to pick up a rock, Walt attracts Tuco's attention by admitting, with no shortage of spite, that he tried to poison him, and tells him through gritted teeth, "You're an insane, degenerate piece of filth. And you deserve to die."

Walt's distraction works, and Tuco takes his eyes off Jesse long enough for him to slam the rock down on Tuco's head. During the ensuing scuffle, Walt grabs Tuco's assault rifle and Jesse ends up with his pistol, shooting the drug dealer in his side. He proceeds to kick the wounded Tuco into a hole. Walt and Jesse clearly considers just shooting him while he is down and wounded, but Walt manages to keep a cool head and tells Jesse that they will just leave him to bleed, as they head for Jesse's car.

But the duo soon realize that they don't have the keys to the car, and then spot an approaching vehicle. Believing it to be Tuco's cousins, Walt drops the assault rifle as he and Jesse decide to get away as quickly as they can on foot. But as they have gotten to a vantage point at a distance, they can't see that the arriving car is actually Hank, who has followed the signal from Jesse's car. Tuco, meanwhile, has managed to drag himself out of the hole and hobbles bleeding over to Jesse's car to lean against it. Hank disembarks from his car and addresses him, believing him to be Jesse, but then realizes that the person front of him is actually Tuco. Hank and Tuco are for a short moment stunned in mutual disbelief, but Tuco snaps out of it first and quickly grabs the dropped assault rifle and fires away at Hank, who jumps into cover and returns fire.

Tuco, however, is too wounded to shoot straight, and Hank manages to gain the upper hand, shooting and killing him. Walt, watching from a distance as his brother-in-law emerges victorious and unharmed from the firefight, grabs Jesse's arm and the two run into the desert. As Hank walks over to inspect Tuco's body, he suddenly hears the ringing of a bell...

"We're gonna rewrite history with this."