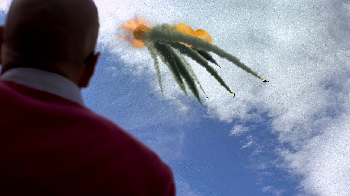 Whoops.
Jesse awakens to find Jane dead next to him. When his attempts to revive her fail, he frantically calls Walt. Walt calls Saul, who sends his private investigator, Mike Erhmantraut, to clean up the drug paraphernalia in the apartment. He instructs Jesse to say "I woke up, I found her, that's all I know", so Jesse could evade suspicion, before leaving so Jesse could dial 911. Donald arrives at the duplex to pick Jane up, but finds an ambulance parked in front. He realizes his worst fears had come to pass as paramedics carry Jane's body away while Jesse tells the police what Mike told him to say. He wordlessly takes Jane's "Apology Girl" sketch and leaves.
Advertisement:

As Hank notices that "Blue Sky" meth was appearing throughout more of the American southwest, Walt continues to be disillusioned with his son's website raking in donations of his laundered drug money. He calls Saul, and learns something disturbing about Jesse...

Mike drives Walt to the "Shooting Gallery", a run-down building in a slum infested with drug addicts. Inside, Walt finds a catatonic Jesse, who sobs into Walt's shoulder, guilty over Jane's death.

At the DEA, Hank meets with some local business owners who want to contribute to their efforts to stamp out drugs. Among them is the owner of Los Pollos Hermanos, Gustavo Fring, who learns from a charity run Hank is conducting that Walt is his brother-in-law...

After Walt checks Jesse in to rehab, he returns home to find, to his embarrassment, that Marie had arranged for a television interview with Junior about his website. As Junior gushes about his father being a kind and righteous man, Walt struggles to hold back his guilt.

Some time after, Walt goes to the hospital and is prepped for surgery to have his tumors excised. As a sedative begins to take effect, Skyler asks for Walt's phone, to which Walt groggily asks "Which one...?", mortifying Skyler.

The surgery goes well, and Walt recovers afterward. While discussing what to do when he returned home, Skyler asks if Walt can be independent. When they return home, Skyler tells him that she's going to take Holly with her to Hank and Marie's for the weekend, and she wants him moved out by the time she returns. She reveals to Walt that he told her about the second cell phone while he was sedated, which led her to learn that not only were Elliot and Gretchen not paying for his medical expenses, but he never visited his mother during his four-day vacation. She has grown sick of the lies, and by extension, of Walt.

Donald returns to work as an air traffic controller. Even though he claims to be doing okay, he is quickly distracted by his lingering grief over Jane's death. His concentration begins to slip as he attempts to direct two planes that are inching closer and closer to one another...

Walt is left alone, sitting on his back porch near his pool, contemplating the fact that his wife is leaving him. His navel-gazing is brought to an abrupt halt when he hears a loud "BOOM!". He looks up to the sky to witness as two airliners collide with one another, exploding violently and raining debris across the neighborhood, including a charred pink teddy bear that crashes into his pool...