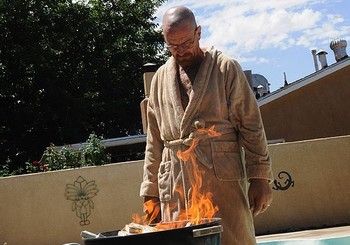 It's a pretty crappy day in Mr. White's neighborhood.
"I have money. I have more money than I know how to spend. What I don't have is my family."
— Walter White
Advertisement:

In the Mexican countryside, a group of people are seen crawling along an adobe road. They are joined by two men arriving in a Mercedes, dressed in sharp suits. They eventually arrive at a shrine made for Santa Muerte, the Mexican saint of death, where they make an offering with a crude sketch of a man with a mustache dressed in a pork pie hat and sunglasses: "Heisenberg".

Albuquerque is shaken to its core as a result of the midair collision between Wayfarer 515 and a charter plane, caused by Jane's dad's grief-related distraction as he worked as an air traffic controller. Everyone onboard both planes died instantly, and debris from the collision rained across the city, causing yet more destruction and pain.

As a guilt-ridden Walt is unable to go through with disposing of his drug money, Skyler meets with a divorce lawyer to discuss ending her marriage to Walt after finding out about the extent of his lies. When asked about their finances, Skyler pauses as her lawyer points out that she has seen many couples hide such information from each other.

Walt moves out of the house and Junior is continually distraught over his mother's perceived mistreatment of his father. Hank and Marie act supportive of both Skyler and Walt, but are clearly confused and dying to know what's going on between them.

Walt attends an assembly at his high school that's supposed to allow students to share their feelings about the plane crash. He gives a guilty speech in which he declares that they should look on the bright side and move on, because it was only the 51st worst plane crash in history and they would all forget about it one day. Meanwhile, the two men from the cold open approach a fearful rural family in Mexico and exchange their suits for the family's more modest clothes hanging out to dry, leaving their car in return and continuing on foot.

Jesse attends group therapy at the rehabilitation center. Angry at the group leader's insistence that they accept themselves, Jesse asks him if he's ever actually hurt anyone. The leader admits that he killed his daughter, having accidentally hit her with his car in the days when he abused cocaine and alcohol. He once hated himself, the same way Jesse hates himself because of Jane's death, but eventually decided that self-loathing interfered with "true change".

Skyler visits Walt at the apartment he moved himself into after being kicked out of the house. She reveals that she's figured out Walt is a drug dealer, and first assumes that he sold weed. Walt finally admits to her that he makes methamphetamine, shocking her. She states that she will not contact the police, but only on the condition that he sign their divorce papers and stay away from them.

Walt picks Jesse up from rehab. Jesse, who blames himself for Jane's overdose and by extension the plane crash, tells Walt that he's learned to accept himself for who he is, and that he's the bad guy. Afterwards, Walt visits Los Pollos Hermanos and sits down with Gus. Walt declares that he is retiring from making meth to repair things with his family. Gus tries to make him an offer of three million dollars for three months' work, but Walt declines, stating that he has plenty of money, but he doesn't have his family.

The two men from the beginning of the episode are crossing the US-Mexico border on a wagon with a group of other immigrants. When one of them recognizes the cartel symbols on their shoes, the men kill the entire wagon and rig it to explode.