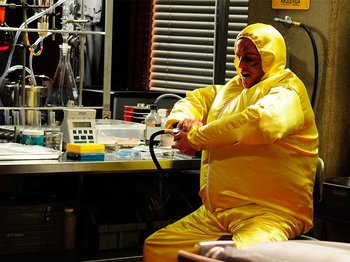 Jesse goofs off at the office.
Walt: No, listen, I, uh...this attack on my brother-in-law, I don't understand it, I don't know what it means. Please, if you may have some knowledge that you can share with me. I fear for my family.
Gus: I'm sure they'll be fine. I am told the assassin that survived is gravely injured. It's doubtful he'll live. Now, thank me and shake my hand.
Advertisement:

A heavily-bruised Jesse is wheeled out of the hospital by an orderly. As he waits outside for his ride, an ambulance arrives from the parking lot shootout with the cartel Cousins, carrying a critically wounded Hank. Jesse watches as the paramedics unload Hank from the ambulance and rush him to the operating room for immediate surgery. Jesse returns outside, where he is eventually picked up by Skinny Pete in his Thunderbird. When Skinny Pete sees Jesse's injuries and asks if he's okay, Jesse smiles and replies, "Actually, I'm great."

In the superlab, Walt tries to fire Gale without hurting his feelings. When Gale pushes for an explanation, Walt tried to use a musical analogy, saying that he is "classical" while Gale is "more jazz". At that moment, Gale's replacement Jesse arrives and loudly marvels at the setup in the lab, leaving Gale more confused. When Walt wants to get right to work, Jesse realizes that Walt is unaware that Hank has been shot.

Walt rushes to the hospital, where Skyler, Marie, Gomez and ASAC Merkert are assembled. Merkert gives Walt a quick rundown on what they know: Hank was attacked by two cartel hitmen, and he killed one of the assassins and critically wounded the other. Marie denounces Gomez and Merkert for making Hank surrender his gun after he beat up Jesse, leaving him unarmed for the attack. She further blames Walt, saying that Hank would've never even known who Jesse was if Walt hadn't supposedly bought pot from him. Skyler comes to Walt's defense, insisting it wasn't his fault. Crying, Marie apologizes.

As Hank's life lays in the balance, fellow cops and DEA agents offer to donate blood in support of him. An impatient Jesse calls Walt, who tells him to sit tight and not cook until he gets to the lab. After Walt hangs up, Skyler suggests they all get breakfast. In the cafeteria, Marie complains about the dirty silverware and declares the hospital a deathtrap. Sensing she is about to spiral out of control, Walt intervenes. After relating his own anxieties before his surgery in the same hospital, Walt assures Marie, "I survived this place. And I'm not half the man your husband is."

At Los Pollos Hermanos, Gus receives a phone call from an angry Juan Bolsa. Bolsa is not happy, and contends that the Cousins would never have shot Hank without approval, accusing Gus of giving it to them. Bolsa backs down when Gus tells him that he is "not in the habit of picking [his] own pocket," since the increased DEA attention from the Cousins' attack will delay the cartel's next drug shipment to Gus, but Bolsa vows that he'll learn the truth about the attack from Leonel, the surviving Cousin. Gus, learning that Leonel has survived, hangs up, realizing he's got a loose end to tie up.

At the hospital, a doctor announces that Hank is out of surgery. On the way out to run errands for the family, Walt walks into the lobby to find Gomez and other DEA agents holding a vigil. Gomez invites Walt to join them in visiting Leonel's ICU room. There, Walt sees the injuries Leonel sustained during the shooting: after Hank crushed his legs between two cars, both of Leonel's legs have had to be amputated. Sensing the group's presence, Leonel turns to look at them, and recognizes Walt. He sits up, tears at the tubes attached to his body, and pushes himself onto the floor, all the while glaring up at Walt. Utterly seething, Leonel drags himself toward him, trailing blood from his stumps, before doctors subdue and drag him back onto the bed.

Stuck in the superlab, Jesse becomes bored and amuses himself by playing with the equipment, such as inflating a hazmat suit with an extractor tube. However, his fun is cut short when Victor catches him and asks why there isn't anything cooking. Jesse contacts Walt about Victor's visit, but a distracted Walt asks if he remembers Tuco mentioning his cousins coming up from Mexico during their captivity in the desert. Jesse thinks he does, but presses Walt about their approaching deadline.

Walt delivers toiletry supplies to his family in a waiting room, as well as a book that Hank gave to Junior about the agents who pursued Pablo Escobar. Walt is distracted by a phone call from Gus, lying to him about being "hard at work" and blaming his inability to meet the week's meth quota on Gale's mistakes. He promises to deliver 400 pounds by next week.

As another evening falls, Walt asks Gomez if the DEA knows who was behind the shooting, and whether other assassins could be on their way. Gomez assures Walt that the attack on Hank was their one attempt and they failed. Gomez's cell rings, and he spreads the word that food is on it's way: Gus is personally delivering fried chicken for every cop in the building. Walt turns pale at the turn of events, knowing Gus will see him.

Walt watches Gus console Marie, knowing that Gus is now aware that he had lied about his whereabouts. Walt's family and ASAC Merkert thank Gus for offering a $10,000 reward for information about the shooting, while Gus mentions that he previously met Hank during a visit to the DEA field office and discussed Walt's cancer. Walt accosts Gus as he walks out, realizing that he knew all along about his brother-in-law being a DEA agent. Gus retorts that he investigates everyone with whom he does business. When asks Walt asks if Gus' presence is a message to him, Gus says, "I hide in plain sight, same as you." Walt expresses fear for his family's safety, but Gus assures him that there's nothing to worry about, for he's heard rumors of the surviving assassin possibly taking a turn for the worst. He asks Walt to thank him and shake his hand before returning to his restaurant.

Just as Gus leaves, there is a fervor of activity: Leonel's vitals are plummeting. Walt, Gomez, and the other cops rush upstairs, where the doctors are frantically trying to resuscitate him, but to no avail: he has died. The officers quietly celebrate his demise. In their glee, none of them notices Mike slipping away, depositing a syringe in a trashbin.

Upon returning to Los Pollos Hermanos, Gus receives another call from Bolsa, who complains that pressure from the U.S. government in the wake of Hank's shooting has brought the Mexican Federales to his residence. Bolsa accuses Gus of betraying him, threatening to pay a visit when things calm down. However, Bolsa will never get that chance: the federales make their move at their moment, and gun down everyone in Bolsa's home, including Bolsa himself. Gus smiles with a smug sense of satisfaction as he ends the call to the sound of gunfire claiming Bolsa's life, before snapping his burner in half and throwing it away.

Walt sits with his sleeping family in the waiting room. The doctor enters to inform Marie that she is finally permitted to see Hank. Marie insists that Walt, Skyler, and Junior accompany her. The family solemnly enters Hank's room. As the Whites look on, Marie kisses Hank's forehead and takes his hand.