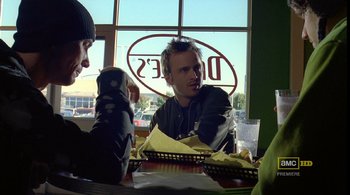 Jesse plans to commit a little embezzlement.
"What's the point of being an outlaw when you got responsibilities?"
— Jesse Pinkman
Advertisement:

A Cold Open montage shows that to the general public, Los Pollos Hermanos is a wholesome franchise of fried chicken restaurants. What few realize is that it is a front for one of the largest drug empires in the continental United States, with Walter White and Jesse Pinkman cooking industrial quantities of crystal meth, which is then distributed across the country, concealed in buckets of fry batter.

Having returned to work, Walt, along with Jesse, gets cracking on making meth for Gus. They end up making a few extra pounds of product during one particularly productive week, and Jesse suggests keeping some on the side to ship later. Walt, however, insists that they give all of their product to Gus. Jesse is displeased: by his own calculations, he believes they are being ripped off as Gus pockets nearly a hundred million dollars to their comparatively measly three million. Walt chastises Jesse for his greed: they were both going to be millionaires, and he's complaining?

The answer is simple for Walt, who visits Hank in the hospital after his attack by cartel assassins, the Cousins. Having regained consciousness, he tells Gomez of a phone call he received warning him shortly before the attack, which may be the one reason he is alive. This revelation takes Walt aback.

Jesse talks to his NA support group about his new job at a laundromat and that his boss is a dick who never tells them what's going on. The rehab leader suggests that the job is "kafkaesque."

At the hospital, Walt assures Skyler that their family is safe despite Hank's attack. At the same time, due to the injury Hank sustained to his spine, he has been rendered paralyzed from the waist down. Marie asks about his chances of regaining mobility and, displeased with the limited care covered by their insurance, decides to look for her own therapists, against the warnings of the doctors.

As Saul tries (and fails) to talk Jesse into buying a nail salon to launder his money, Walt meets with Gus at his company's chicken farm to "clear the air." Walt tells Gus how he thinks he was at one point the Cousins' target, but somehow, their attention was drawn away from him and to Hank instead. At the same time, someone put in an anonymous call to Hank to warn him of the attempt on his life, as a ploy to play both sides against each other and bring unwanted attention to the cartel from both Mexican and American governments. This would also cut off the drug trade across the border, meaning that a domestic meth operation would have a monopoly over the Southwest. "We're both adults," Walt concludes, "I can't pretend I don't know that person is you." Although appreciative - "and more than that, I respect the strategy" - Walt asks for one thing after his contract with Gus has concluded: assurance of his family's security.

Gus, however, makes a counter-offer: in exchange for protecting his family, he wants to extend Walt's contract to an open-ended $15 million/year arrangement.

Walt accepts the offer. As he drives home, he begins flooring the accelerator, closing his eyes, and coasting down the road. He only snaps out of it mere moments before hitting a semi head-on, and swerves to avoid it.

As Skyler begins to reconsider her affair with Ted once and for all after he visits her at home, Jesse meets with Badger and Skinny Pete to wax nostalgic on his "outlaw" days of cooking meth out of an RV, and asks what the point of being a criminal was when you had responsibilities. Jesse proposes starting up their own business again: all they would need is the product, of which he could skim from the superlab. To that end, Skinny Pete and Badger infiltrate Jesse's rehab group, in order to sell their product to the addicts in the group.

Back at the hospital, Marie, cross with their insurance company for refusing to pay for Hank's preferred physical therapy plan, is ready to go to TV news to complain. Skyler, however, offers to pay for Hank's hospital bills and rehab instead, stating that Walt has the money to pay for them. Before Walt can stop her, Skyler explains that Walt had earned over a million dollars while combating a gambling addiction, which started as a way to pay his cancer bills and was the reason for his and Skyler's marital issues. When Walt asks afterwards how she crafted such a masterful lie, Skyler simply tells him "I learned from the best." As far as she's concerned, Walt must be the reason Hank is in the hospital.