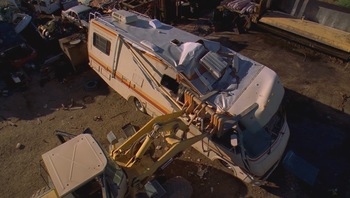 Say goodbye to the Crystal Ship.
"This is my own private domicile and I will not be harassed... bitch!"
— Jesse Pinkman
Advertisement:

A reservation police officer is called to check in on an elderly woman but finds that she's been killed by the Cousins, who are living in her farmhouse. He tries to confront them, but they surprise him with an axe and kill him.

Skyler calls Walt, who has finally filled out their divorce papers, and challenges him on his intention to provide for them with drug money after their separation. Walt shrugs off her concerns before closing a deal on a new condo.

Meanwhile, Jesse gives out samples of the batch he'd cooked on his own to his friends. With both Skinny Pete and Badger digging the product, Jesse proposes going back into business, but this time playing it safe, selling in small quantities and not pushing into others' territory. He has Skinny Pete set out to get materials while Badger has his cousin Clovis fix up the RV. But little does Jesse know, Hank is watching him after finding out about his connection to the RV, waiting for him to make an incriminating move...

Walt begins his work at Gus' superlab, where he meets his assistant: Gale Boetticher, an X-ray crystallographer just like Walt was in grad school. A staunch libertarian, Gale tells Walt that he got into the meth trade because he believe that some people will always go out of their way for drugs, so he should at least help in making the best drugs possible to give them what they want. Walt and Gale bond over their shared love of chemistry and their fascination with the written works of Walt Whitman.

The Cousins pay a visit to Los Pollos Hermanos. Gus assures his manager Cynthia that they are not a problem, but talks with the Cousins in confidence and tells them to meet with him at sunset.

As Hank continues to watch Jesse's house, Marie calls him and asks when he will be home. When Hank insists that he has to keep watch over Jesse's place, Marie suggests talking to Walt, since Skyler had once told her that Jesse sold him weed. Hank calls Walt and tells him his theory about Jesse having an RV being used as a mobile meth lab, putting Walt on edge: Jesse's RV has his fingerprints on it, so if Hank brings it in, he's as good as caught!

Walt races to the Clovis' repair yard as Badger is retrieving the RV, and tells Clovis that the DEA is close to making a bust on the RV. As Clovis recommends to Walt a guy who would wipe the RV off the face of the earth, Badger calls Jesse to tell him what's happening. Panicked, Jesse races out the door to stop Walt, unaware that he is now being tailed by Hank.

Walt brings the RV to a junkyard owned by Old Joe, whom Walt pays to have the RV destroyed. Old Joe reassures him that it would be shipped off to China to make patio furniture, and the authorities would never know where it went. As Walt takes a moment to look through the inside of the RV with some nostalgia, Jesse barges in. Walt peeks out the window and realizes Jesse had inadvertently led Hank right to them!

Hank tries to get into the RV, but finds the windows and doors locked. He tries to break in with a tire iron, but Old Joe returns and chastises him for trying to break into the RV without a warrant. The two argue over whether the RV could qualify as a vehicle that was legal to search, or a domicile that was protected from unwarranted search and seizure under the Fourth Amendment. Annoyed, Hank yanks the duct tape off of the doors, claiming that the bullet holes they were hiding give him probable cause. Under Walt's direction, Jesse tells Hank that he couldn't have known there were bullet holes before taking off the tape, which Joe concurs with, stating that probable cause had to be readily apparent.

Seeing no other way to get Jesse, Hank decides to call his ASAC to get a warrant that would let him search the RV. This gives Walt the time he needs to call Saul for a favor...

While waiting for his warrant, Hank gets a call from an Albuquerque police officer informing him that Marie was in a car accident and being airlifted to a hospital. Panicked, Hank drives away and makes his way to the hospital. While hurriedly searching for Marie, he hears his phone ring and answers. It's Marie, strangely okay, and asking about dinner as though nothing had happened.

Hank simmers with rage as he realizes he'd been tricked: the "police officer" that called Hank about Marie was actually Saul's secretary, Francesca.

With Hank off their tail, Old Joe goes through with the RV's destruction. Walt and Jesse watch on mournfully, yet with a sense of relief, as the recreational vehicle that served as their first lab when they started working together is torn up, then compacted into a small cube to be shipped away. Once the RV's completely destroyed, the two part ways.

Meanwhile, out in the desert, Gus meets with the Cousins. He reiterates that while Walt is under his employ, the Cousins were not to approach him. One of the Cousins insists, stating that Walt killed Tuco, their family. Gus corrects them: while Walt did indeed betray Tuco, it was actually a DEA agent who ended Tuco's life. Even though Juan Bolsa told them that the DEA was off-limits, Gus tells them that north of the border is his territory, and what he say goes. As such, he gives the Cousins his blessing to exact their revenge against Tuco's real killer: Hank Schrader.