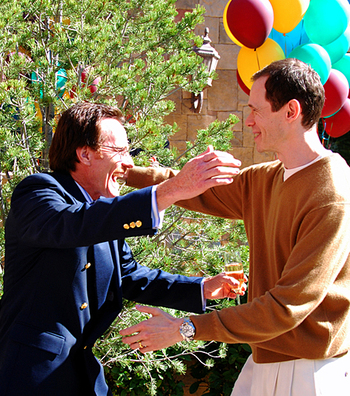 Jesse starts applying for jobs, with his latest attempt at finding employment leading him to a realty office. Jesse soon learns that the job he was interviewing for was as a costumed sign dancer. As he storms off, he finds that his old friend Brandon "Badger" Mayhew was working at the realty office as a sign dancer. The two catch up during Badger's break over a joint of marijuana, and Badger asks about Jesse's meth. Jesse claims he's retiring from the meth business, but Badger offers to help him with his cooks if he ever gets back in the game.

Meanwhile, Walt and Skyler go to a birthday party for their old friend: Elliot Schwarz, Walt's old lab partner and a co-founder of the research firm Gray Matter Technologies. Walt and Skyler greet Elliot and his wife Gretchen, who also worked with Walt and with whom Walt was once romantically involved. Walt feels out of place at the party, since Elliot and his peers are very well-off and have brought expensive gifts for him, while all Walt had to offer was a package of ramen noodles. Elliot appreciates the gift, though, waxing nostalgic on how he and Walt basically lived off of ramen as graduate students.

Later on, Elliot offers Walt a new job at Gray Matters. Walt politely declines, but Elliot presses on, mentioning that he could give Walt good health insurance at his company. Walt becomes cross with Skyler for having even brought up his cancer with Elliot, having refused Elliot's offer.

Jesse decides to try his hand at cooking Walt's meth once more. He enlists Badger's aid and drives his mobile meth lab RV out into the desert. All throughout, in a reversal of his first attempts at cooking with Walt, Jesse takes the chemistry seriously while Badger goofs off...

One evening, Junior's friends try to convince him into asking a gentleman at a convenience store to purchase alcohol for them. His efforts fail when the gentleman reveals himself to be an off-duty police officer, who calls Junior's "Dad", Hank. Hank is less than pleased with Junior calling him instead of his father, and theorizes to Skyler and Marie that Junior may be acting out, asking for beer and smoking pot, as a result of his father's cancer. Skyler realizes Marie mistakenly thought Junior was smoking weed and clarifies it was Walt, whom she thinks hasn't been right since his diagnosis.

Meanwhile, out in the desert, Jesse is displeased with his meth cooks, claiming them to be too cloudy and discarding them. Badger becomes angry with Jesse wasting what he thinks is perfectly good meth. A fight breaks out between the two before Jesse kicks Badger out of his RV and drives off without him.

When Walt returns home, Hank, Marie, Skyler, and Junior stage an intervention. The intervention goes awry: while Skyler and Hank believe Walt should take Elliot's offer and undergo chemotherapy, Marie argues that Walt should do what he thinks is best. Tempers flare between the two sisters before Walt intervenes and gives his final thoughts: that it wouldn't be worth it for him to live if he was too sick from chemo to enjoy his life. Thus, he will not take chemo.

Walt, however, thinks the matter over. By the following morning, he announces to her that he will undergo chemo after all and, at the treatment center, suggests to Skyler that he will discuss the matter with Elliot. In truth, however, he tells Gretchen that he has insurance to cover his medical costs. He approaches Jesse afterwards, and offers to cook with him again.