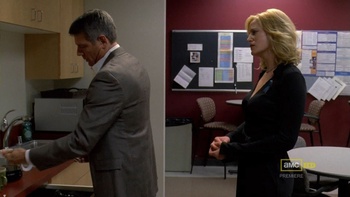 The one where Skyler fucked Ted.

Around the time Hank was working in El Paso, Tortuga met with his boss in the cartel, Juan "El Jefe" Bolsa. Bolsa offers Tortuga a birthday present: a live tortoise. He even paints a birthday message onto the tortoise's shell. Tortuga panics when he sees what Bolsa wrote for him: "HOLA DEA". Before he can escape, the Cousins apprehend and behead him.

After Mike leaves from bugging Walt's house, satisfied that the Cousins have been driven off and that Walt is safe from them for the time being, Skyler returns home and is disturbed to find Walt inside. She threatens to call the police and tell them about his meth cooking, but Walt refuses to leave, explaining to her that his family was everything to him, and without it, he had nothing to lose. Junior returns home and happily greets his father, and is infuriated when the police arrive. Skyler tries to explain to the officer that Walt is trespassing and that she wants him arrested, while Walt dutifully tends to Holly and apologetically admits that he hasn't been a very "attentive" husband lately. But there is no legal excuse to arrest Walt: he and Skyler are not legally divorced or separated yet (since Walt refused to sign the divorce papers), the house was bought in both of their names, and as Skyler openly admits, he hasn't actually harmed or threatened her. Since Skyler can't bring herself to reveal Walt's crimes, the officers cannot do anything to help.

Meanwhile, Jesse sits alone in his new home: the house his aunt owned, which he bought using money from the last big meth cook. Still grieving Jane's death, he calls her cellphone, which goes to voice mail, just so he can hear her voice. Saul pays a visit and asks Jesse when he can expect Walt to get back to cooking. Jesse says he'll try to convince him, but goes back to calling Jane's cell after Saul leaves.

As Hank learns that his boss wants him to go to El Paso again, the Cousins, along with Bolsa and their uncle Hector Salamanca, meet with Gus to discuss the matter of Walter White, whom the Salamancas blame for the death of Tuco and want to exact revenge against. Gus acknowledges their right to revenge, but asserts that he is in business with Walter. Once that business is concluded, what happens to him will be none of his business; but until then, they are not to approach him.

Hector rings his bell in furious protest as Gus and Bolsa continue to talk in private. Bolsa warns Gus that he should conclude his business with Walt as quickly as he can if he wishes to remain on good terms with the cartel. There was also no telling how long the Cousins would wait before they go after Walt again...

Still in the doghouse with Skyler, Walt is forced to sleep on the floor of Holly's bedroom, with Holly now staying in Skyler's room.

Skyler meets with her divorce lawyer, and finally admits to her, thanks to attorney-client privilege, that her husband makes meth. The lawyer suggests Skyler divorce him immediately and sue him while she contacts the police, but Skyler is reluctant to do so: she fears what would happen if her son found out the truth about his father. She also doesn't want to suffer all the blowback from turning Walt in when it's unlikely Walt will survive his cancer much longer anyways.

Hank and Gomez take a trip to a seedy bar at Hank's request, where Hank suspects two men of participating in a drug deal. Hank fights back against a panic attack in the bathroom before leaving his sidearm in his car and going back to start a brawl with the two. After they return to HQ, Gomez tells Hank that he corroborated his story to the ASAC that the other bar patrons had started the fight, but left out the fact that he left his sidearm in his car. He's concerned for Hank's reckless behavior, but Hank coldly brushes him off.

Jesse continues to call Jane's phone to hear her voice until it is disconnected. The next morning, he returns to the RV and prepares to cook once more.

Walt finally shows Skyler the stash of cash he earned cooking meth. He gives her a speech explaining that the money that he was earning would help to pay for Junior and Holly's college tuition, their mortgage, and other expenses after he has passed. He states that everything he did was for the family, and all is sacrifices would mean nothing if she did not accept it. Skyler doesn't say a word, glaring daggers at Walt all the while.

The following day, Skyler meets her boss Ted Beneke in the break room. She suddenly kisses him, then asks if his kids are home. Ted, pleasantly surprised, says "No"...

That night, Skyler returns home to Walt cooking for Junior and a friend who came over. He is eager to hear what Skyler had to say about what they discussed that morning. Skyler's response is only three words, but those words made her feelings very clear, and shake Walter to his very core...