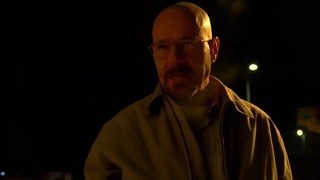 "Run."
"You got a good thing going here. We all do. Do you wanna risk it all on one junkie?"
— Mike
Advertisement:

Jesse keeps his eye on the dealers responsible for Combo's death and realizes that Wendy, a prostitute who's helped Jesse in the past, regularly delivers them hamburgers as they sit on their corner in exchange for meth.

Walt, teaching his son how to drive, is pressed by Skyler about buying Bogdan's car wash as a money laundering front. Walt uses the opportunity to bargain for time at home with his family: even though the two of them are not even close to being a loving couple now, they agree on letting Walt stay over for dinner four nights a week.

Afterwards, Jesse and Walt meet at a bar. Jesse reveals to Walt that he had purchased their own blue meth from dealers working for Gus, the same ones that had Combo killed. He tells Walt that the dealers are using Andrea's 11-year-old brother Tomás to sell and kill for them. He asks Walt for some ricin, the same poison they originally planned to kill Tuco with, so that he can poison the burgers Wendy brings to the dealers everyday. Walt refuses, calling Jesse's desire for vengeance "ridiculous" and stating that killing the dealers would accomplish nothing. Jesse, however, is deaf to reason: he plans to kill the dealers, with or without Walt's help.

As Hank continues to refuse to leave the hospital until he can walk, following his injury after the cartel's attack, Walt and Saul discuss what to do with Jesse. Walt wants Saul to get Jesse arrested so that he can "cool off" in jail for a few months, and Saul agrees to put his guy Mike on it. Jesse buys his own ricin off the internet and instructs Wendy to give the dealers ricin-laced burgers, playing to Wendy's maternal instincts and asking her what she'd do if she found out her own son was working for drug dealers.

Mike pays Walt a surprise visit that evening. Mike reveals that he works for Gus and is firmly against Walt's plan to get Jesse arrested, since he knows Gus would consider it a threat to their business. To demonstrate his point, Mike tells Walt about a criminal he knew in his days as a cop: a notorious wife-beater whose wife never pressed charges so they could never hold him for more than a day. One day, when his partner was out, Mike arrested the wife-beater, drove off into the desert, and held him at gunpoint, ready to kill him. He ultimately decided against it, but threatened him not to hurt his wife again or he would finish the job. Tragically, the wife was killed a fortnight later, and Mike felt responsible for her death because he took a "half measure" when he should have "gone all the way". Before he leaves, he gives Walt some parting advice: "no more half measures".

Before Jesse can carry out his plan to assassinate the dealers, Mike and Victor arrive, driving Wendy off and apprehending Jesse. They take Jesse to the Los Pollos Hermanos factory farm, where Walt, Gus, and the dealers are waiting.

Gus concedes that Combo's death was a rash act, but in the dealers' defense, Jesse had him selling on their territory. Jesse calls Walt out on telling Gus about his plan, but Gus tells him that Walt is his only friend in the room, and that if not for Walt, things would turn out very differently for Jesse. He instructs Jesse to make peace with the dealers, but Jesse refuses, telling Gus they use kids to do their killing. Although cross with Jesse, Gus decides to grant him this one indulgence: he tells the dealers plainly, "No more children", and has Jesse shake hands with the dealers.

Back at the hospital, Marie, determined to bring Hank home, makes a deal with him: if she could get him to achieve an erection, he would have no choice but to come home. Hank reluctantly accepts, and warns Marie of the futility of her proposal. In the end, however, she manages to get a rise out of Hank: he leaves the hospital looking humiliated and defeated as Marie looks smugly triumphant.

That evening, Jesse is with Andrea when she receives a phone call that leaves her distraught, and Jesse shocked: Tomás has been murdered.

Walt tries to call Jesse the following day, but to no avail. When he hears of Tomás' death on the evening news, however, he realizes why he can't reach Jesse. He tries to return to dinner with his family, but ultimately can't take it and rushes out the door.

Jesse is at the corner where Combo was killed. He takes a hit of meth for the first time since getting clean, then makes his way to the dealers, prepared to shoot them.

As they start to draw their guns, however, Walt suddenly appears, running over the dealers with his car. One is killed instantly, and Walt takes the other's gun and shoots him in the head as he struggles to move before looking at Jesse and giving him a simple instruction: