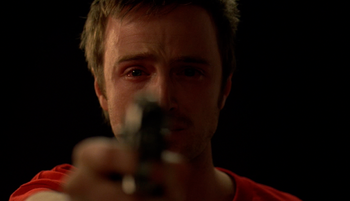 It's got to be you, Jesse...
"I saved your life, Jesse... are you gonna save mine?"
— Walter White
In a flashback to sixteen years ago, Walt and Skyler are touring their future home. Walt wants to find somewhere bigger and better, but Skyler likes it and says it's the best they will find in their price range. Walt says they should dream big because they have nowhere to go but up.
Advertisement:

In the present, Walt is called out into the desert by Mike and Gus to answer for his impulsive decision to save Jesse from getting killed in a shootout with two of Gus' dealers by running them over with his car. Walt repeats the advice Mike given him: "No more half measures". Mike is less than pleased.

Gus chastises Walt for jeopardizing everything for "some worthless junkie". Walt argues back that Jesse was angry about the dealers' murder of 11-year-old Tomás, suggesting that Gus was the one who ordered his death. Walt states that Jesse has gone on the run, and he has no idea where he is. Walt proposes two options for Gus: kill Walt and spend the next few months hunting down Jesse without Walt's 99.1% pure meth to sell, or proceed with business as usual. Gus chooses the latter option, but insists on choosing Walt's lab partner: Gale Boetticher, whom Walt had previously replaced with Jesse. In addition, Gus has the locks to the superlab changed, so that the only way Walt can enter is if Victor lets him in.

That night, a group of cartel heavy hitters take over a warehouse run by one of Gus' workers, Duane Chow. Mike dispatches the cartel men and wounds Chow for not letting him know of the situation. He later speculates to Gus that the cartel is trying to find a weakness in their operation. As to Jesse, Mike is still searching.

Later, Gus pays Gale a surprise visit to his home. Gus explains to Gale that Walt has cancer, and that he may not have long to live. As such, he wants Gale to be ready to take over the superlab when Walt passes away. Little does Gale know, Gus plans for Walt's death to be due to anything but cancer...

Mike interrogates Saul as to Jesse's location. He gives Mike the address of a home in a trailer park. Unbeknownst to Mike, the address leads nowhere: Saul and Walt are hiding Jesse at the laser tag arena Saul had suggested Walt buy to launder his money. Walt explains that he is safe only as long as it takes for Gale to build up the confidence to cook Walt's formula and run the lab on his own. Jesse suggests that Walt turn himself into the DEA and go into witness protection with his family in exchange for giving Gus to the feds, while Jesse skips town, but Walt refuses. Instead, he suggests that he can secure their safety if he is the only chemist. Jesse, realizing this would mean Gale's death, echoes a statement Walt made about him when he was originally conspiring to kill Gus's dealers: "I'm not a murderer". Walt offers to do the deed instead; all he would need from Jesse is Gale's address, since Victor is tailing Walt and he can't find it himself. Jesse is still reluctant to take part in the plan, but Walt reminds him that he saved his life and expects Jesse to return the favor. Jesse finally agrees.

That night, before Walt can carry out Gale's assassination, he is intercepted by Victor, who tells him there's a chemical leak at the superlab and that he needs to go there to investigate. When they arrive, Mike is there, waiting to kill Walt. Walt begs for his life, first offering to cook for free, then offering to give Jesse up.

Mike gives Walt a phone to call Jesse and arrange a meeting so they can find him. When Walt calls Jesse, however, he tells him that he's stuck at the lab and that Jesse has to "do it" in his stead. Jesse grabs his gun and runs out of the laser tag arena. Mike demands to know what Walt did. Walt coolly recites Gale's home address, and says that Mike can't afford to kill him now...

Gale is at home, making tea, when he hears a knock on the door. He answers the door to find Jesse, pointing a gun at him. Gale first assumes he is being robbed, but it slowly dawns on him that Jesse has other intentions. He meekly pleads, "You don't have to do this..."

Jesse, fighting back the tears in his eyes, hesitates for a few moments.

Then, he pulls the trigger.

"You don't have to do this."
Feedback

A Trip to Lazer Tag

Saul takes Walt to the lazer tag arena he's trying to get him to buy. In the background, Victor is revealed to be following them, but Walt suspects this.

A Trip to Lazer Tag

Saul takes Walt to the lazer tag arena he's trying to get him to buy. In the background, Victor is revealed to be following them, but Walt suspects this.