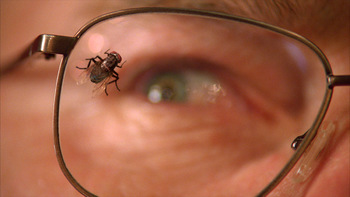 "He's got some skills, yo..."
"I'm saying that I lived too long. You want them to actually miss you. You want their memories of you to be...but she just won't...she just won't understand. I mean, no matter how well I explain it, these days she just has this...this... I mean, I truly believe there exists some combination of words. There must exist certain words in a certain specific order that can explain all of this, but with her I just can't ever seem to find them."
— Walter White
Advertisement:

The Cold Open shows several close-up shots of a house fly buzzing around while Skyler's voice sings a lullaby.

Walt's morning alarm goes off, but he's already awake and clearly has been all night. He and Jesse arrive at work to clean Gus' superlab. Walt's calculations on their meth yields seem to be off, though: they're coming up consistently short. Jesse, trying to keep Walt from realizing that he's skimming meth from each batch to sell on his own, suggests spillage, evaporation, and other causes for their product's yield being low, but none of them make sense.

After Jesse punches out for the day, Walt notices a fly in the superlab. Worried about contamination, Walt tries to kill the fly, but his every attempt fails, with one attempt causing him to fall from the above walkway and badly hit his head. The fly lands on one of the lenses of his glasses, almost as if taunting him...

When Jesse returns to work the next day, he's saddened after noticing a cigarette butt with a lipstick smudge still in his car. He sees that Walt's car is still parked outside the laundromat. When he enters the lab, his ears pop as a result of increased air pressure that Walt subjected the lab to in order to contain the "contamination". Jesse is freaked out, but when Walt finally states that the contamination is only a house fly, Jesse is left confused and exasperated: Mr. White is getting this worked up over a fly?! When Jesse tries to cook, Walt commands him to stop, and hits him with his homemade fly swatter. After Jesse, at Walt's request, whacks Walt in the head with the swatter after the fly lands on him, Walt explains that there is no more room for error when dealing with Gus: if they cannot clear out the contamination, they're as good as dead.

Jesse tries to tell Walt that they should step out for air and clear their heads, but Walt takes Jesse's lab keys and banishes him from the lab: "If you're not gonna help me, stay out of my way!" he barks. Jesse counters by shutting off the laundromat's main breaker to regain entrance.

When Jesse returns to the lab, he brings fly paper. He also brings some sleeping pills to slip into Walt's coffee so that the clearly-unstable Walt can get some sleep.

While waiting for the fly to get caught in one of the fly paper strips, Jesse tells Walt about "Scrabble", a possum that had been found under his aunt's house that used to cause a ruckus. Even after the possum was removed, his aunt was convinced that "Scrabble" was still under the house making noise. It was a sign that her cancer had metastasized and spread to her brain.

Walt tells Jesse that he has been to his oncologist and is still in remission. As the sleeping pills begin to take effect, he confides in Jesse his belief that he's "lived too long," and begins wondering what the perfect moment for him to die could've been. He's wracked with guilt and sorrow over the lies he's had to tell, and the fact that he cannot seem to make Skyler understand that he is cooking meth for the sake of his family.

He tells Jesse how he had met Jane's father on the night that she died: the universe may be random, but how could it be random that he wound up in the exact same bar as Donald Margolis on the very night that Jane overdosed? As he becomes drowsy, he recalls hearing his wife singing a lullaby to their daughter just before Walt had left to give Jesse the money Jane had been blackmailing him for, and, unbeknownst to Jesse, where he had let Jane die from a heroin overdose. If he had just passed away at that moment, having made enough money to support his family after his death without them ever finding out about his meth cooking, it would've been perfect...

Jesse sees the fly on the ceiling and precariously sets up a ladder so that he can try to swat it. Walt tells him he'll break his neck, so Jesse tells him to hold the ladder steady. As Jesse spots the fly and prepares to swat it, Walt, half-asleep, begs Jesse to come down and apologizes for Jane. Jesse, not realizing Walt was confessing to letting Jane die, tells him it's not his fault: no one could've stopped Jane from overdosing.

Conceding that "it's all contaminated," Walt tells Jesse to forget about the fly and finally falls asleep. Jesse sees the fly one last time as he's climbing down from the ladder and manages to swat it, killing the pest once and for all. He turns in excitement to Walt, only to realize he'd fallen asleep. Jesse lays Walt down on the couch outside their lab and finishes the cook on his own.

The two return home the following morning. In the parking lot, Walt pulls Jesse aside and talks to him: he suspects Jesse may be stealing some of their product, but didn't want to say anything in the lab in case it was rigged with microphones. While he never outright accuses Jesse, he warns him that if he is and Gus finds out, Walt wouldn't be able to protect him.

Jesse coldly tells Walt that he didn't steal anything before he leaves. Later that night, Walt lies in bed, seemingly unable to sleep, when all of a sudden, a familiar irritating buzzing reaches his ears...