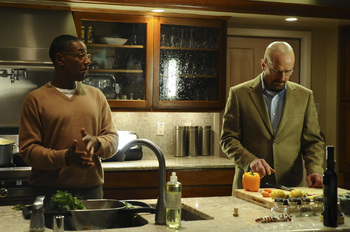 In a flashback, Jesse and Jane visit the Georgia O'Keefe museum in Abiquiu. As they drive back, Jesse says it was boring of O'Keefe to paint the same door over and over again, assuming she was trying to make it perfect. Jane argues that she painted the door so many times because she loved it and saw something new everytime, so she wanted to make that feeling last. She puts out a cigarette in Jesse's car with a lipstick smudge on it.

As Hank struggles with his physical therapy after the cartel's attack and Skyler and Marie discuss his medical bills, Walt continues to contend with the possibility that Jesse is stealing some of the meth they cook for his own side-business.

At the Narcotics Anonymous meeting, Badger and Skinny Pete confess to Jesse that they can't bring themselves to sell the blue meth to the other members, both suffering a pang of consciousness at trying to hook recovering addicts. Jesse, who has no such scruples, decides to show them how its done by attempting to work over a new member of the NA group: Andrea Cantillo, who claimed that she "didn't want to be here."

After dinner, where Junior announces he will soon be able to drive without supervision and wants a 1971 Mustang for his own car, Walt hands Skyler some of his money in confidence to pay for Hank's medical bills. Skyler is worried about whether the money is "unimpeachable". To that end, she goes with Walt to meet Saul. Saul suggests that they use money from Walt's "gambling addiction" as seed money to buy a business to launder his drug money: specifically, a laser tag arena. Skyler is perplexed: Walt's purchasing a laser tag arena would be too out of character, and would draw suspicion. After leaving Saul's office, Skyler proposes an alternative solution to Walt: using his seed money to purchase Bogdan's car wash, a business he worked at for many years, and one that would allow him to evade suspicion.

Meanwhile, Jesse seduces Andrea in an effort to coax her into buying his blue meth. His sales pitch to her comes to an abrupt halt when her five-year-old son, Brock, returns home. Jesse and Brock hit it off and become fast friends, and he refuses to sell to Andrea after finding out she's a mother. Andrea calls Jesse out on his hypocrisy, asking how a drug dealer like him could tell her how to live her life. She insists that she is a good mother, and that she wouldn't let what happened to her younger brother Tomás happen to her son. She confides in Jesse that Tomás had fallen in with a gang and, at the age of 10, was made to assassinate a rival drug dealer, shooting him through the neck. Jesse becomes horrified as he learns that Tomás was the one who killed Combo...

At the hospital, Marie excitedly tells Hank that he can be released soon, since he can continue his physical therapy at home. Hank refuses, however, and adamantly states that he will only leave the hospital when he can walk out.

Walt discusses the idea of buying the car wash with Saul, but Saul is reluctant: he explains that the car wash doesn't have a "Danny", an accomplice who would let his business be used for laundering money and ignore any wrongdoings to keep his it afloat, much like the owner of the laser tag arena, a fellow named "Danny". Walt discusses the idea of a "Danny" with Skyler afterwards. Skyler volunteers to be the car wash's "Danny", an idea that Walt is reluctant to go along with: he reminds Skyler that they are divorced. Skyler reveals, however, that she never turned in the divorce papers: legally, they are still married, and as such, they would not be compelled to testify against each other under spousal privilege.

Gus invites a surprised Walt over for dinner at his home. As the two share a Chilean dish that Gus has Walt help prepare, Gus offers Walt advice: that anyone can know how to be poor, but that one must learn how to be rich; and as such, to never make the same mistake twice.

Meanwhile, Jesse travels to the street where Combo was shot. He sees a young boy circling around on his bike, the same one that shot Combo: Tomás. He asks the boy for some meth. A car pulls up with the two gangsters who were present when Combo was shot, and Jesse buys some meth from them. He soon realizes that the meth is blue, exactly the same as the meth he and Walt cook.

From this, Jesse comes to a frightening realization: the people responsible for Combo's death are on Gus' payroll!