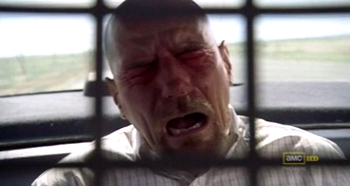 Walter H. White after expressing his right to free speech under the First Amendment.
"It is not a disaster. It's not a disaster, alright? She's not going to the cops, she's not telling a living soul. You wanna know why? One word: blowback."
— Saul Goodman
Advertisement:

On his way to work, Walt is pulled over by a patrol car. The police officer writes a ticket for Walt due to him driving with a cracked windshield. Walt tries to explain that the windshield was damaged due to the Wayfarer 515 collision and the ensuing debris raining down, but the officer is not interested in excuses. Walt becomes increasingly belligerent, paying no heed to the officer's warnings as he rants about how "Hellfire rained on my head! There were body parts strewn everywhere!" Eventually, Walt is arrested and thrown into the back of the police car, sobbing in pain from the pepper spray in his eyes.

At the DEA, Hank discusses a truck explosion that occurred on the Mexican border, which he speculates is the work of the cartel. Before he can get to work on finding out what motivated this attack north of the border, he receives a phone call about Walt's arrest. Hank goes to pick up Walt, who apologizes to the arresting officer before confiding in Hank that Skyler was divorcing him and not letting him see his own children.

Jesse notices that his old house, inherited from his late aunt, has been renovated and put up for sale by his parents. He talks with his dad, who is kind but guarded, and gently turns down Jesse's attempts to reconnect.

Saul meets Walt at his apartment, where he learns that Skyler is now privy to his meth cooking enterprise. Saul assures Walt that he has nothing to worry about: Skyler can't afford to tell the authorities about Walt cooking meth because she and her children (as well as Hank's DEA career) would suffer from the blowback, and their house would be confiscated. Besides, if push comes to shove, Saul says, Walt could relocate, find a new wife, and resume his operations. Walt, however, adamantly refuses to cook any more meth, leaving Saul worried about his own bottom line. As he leaves, he calls his PI Mike, whom he hired to help Jesse avoid a drug bust following Jane's death, to help him keep an eye on the White residence...

Back at the White residence, Marie and Hank have come over for dinner with Skyler and Junior. Junior calls Skyler out on her treatment of Walt, claiming his eyes were red from crying when he came in late to school and calling her a bitch. As Hank and Marie leave, Hank mentions his suspicion about Walt having an affair, but Marie isn't sure that's the case; she claims that Skyler would've confided in her about it if that was the case.

Meanwhile, Jesse visits Saul, who gives Jesse his share of the money from Walt's big meth sale to Gus as per Walt's instructions. He then rants about Walt refusing to cook, and asks Jesse if he can talk sense into Walt. Jesse, however, has a proposition for Saul...

At a retirement home, Casa Tranquila, the two mysterious men from the last episode pay a visit to a familiar figure: their uncle, wheelchair-bound Hector "Tio" Salamanca. It's clear that these are the Cousins that Tuco had once referenced to Walt and Jesse. The Cousins take a Ouija board, and one runs his fingers over each letter, with Hector ringing his bell over each letter in the name he wants to spell out. The other writes down each letter, eventually spelling out "WALTER WHITE", a name that makes Hector ring his bell furiously.

At Beneke Fabricators, Skyler confronts Ted once more on cooking his books. Since he is dead set on committing fraud, Skyler agrees to help him so he isn't as conspicuous in his bookkeeping. She asks him how he would explain his illegal activities to his children were they to find out about them. Ted answers that he would explain to them that, illegal though his actions were, he had the best intentions: keeping his business aloft, and supporting his family. This answer gives Skyler pause...

As Junior visits Walt and Walt vaguely tries to explain to him that his mother had her reasons for the way she treated him, Saul meets with Mr. and Mrs. Pinkman and their lawyer. Saul explains that he has a client who is interested in buying Jesse's aunt's old home. The buying price is approximately $800,000, but Saul's client has a counter offer: $400,000 in cash. Before the Pinkmans can walk out in disgust at the offer, claiming to have spent almost that much renovating the house, Saul explains that they had committed a felony by excluding the existence of a meth lab on the premises in the house's disclosure statement, and that if they refused the offer, Saul could sue them and have the residence encumbered. Mr. and Mrs. Pinkman and their lawyer are left speechless.

Walt drives Junior home, and brings a pizza with him intended for a family dinner. Skyler, however, adamantly refuses to let him in the house, forcing Walt to leave, but not before tossing the pizza onto the roof of the house in a fit of rage. This prompts Skyler to call Walt the following morning, warning him that she would get a restraining order if he did not relent.

As the Pinkmans take the last of their belongings from the house they sold, Jesse appears. He walks up to the front door and reveals to his parents that he bought the house, showing them his new set of keys before going inside.

Mike, working for Saul, installs surveillance bugs throughout the White residence. He falls back when he sees Walt pull in with his belongings and break into the house through the crawl space. He watches as another car pulls in and the Cousins step out, one brandishing an axe, and enter the house through the door Walt had left unlocked.

As Walt takes a shower, the Cousins sit on his bed and wait for him to emerge from the bathroom. Mike contacts Victor and tells him to relay an important message to their employer, Gus Fring. A text is sent to the Cousins, consisting only of one word: "POLLOS". This forces the Cousins to leave, with Walt being none the wiser to the attempt on his life.

Saul gets the best of Mr. and Mrs. Pinkman, which is cathartic for them kicking Jesse out of his house.

Saul gets the best of Mr. and Mrs. Pinkman, which is cathartic for them kicking Jesse out of his house.