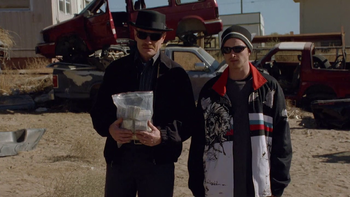 Walt and Jesse's first big payday.
Skyler: Where...did that come from? And why was it so damn good?
Walt: Because it was illegal.
Advertisement:

Jesse has recovered enough to go home from the hospital, and Walt comes over to give him his cut and inform him of the deal he has made with Tuco. Jesse is amused to see that Walt is now bald, and doesn’t believe at first that he has actually made a deal with Tuco. When he realizes that Walt is telling the truth, he gets angry, both because Walt has made a deal with the guy who beat him senseless and because Walt has promised to deliver Tuco two pounds of meth. He explains to Walt their supply line of pseudo is stretched too thin to produce that much meth.

Walt and Skyler go to a meeting with Walt's oncologist. Skyler says that Walt has been acting more healthy, and asks if alternative therapy could help him. The doctor says it’s fine as long as it doesn't interfere with his treatments.

Jesse and Walt meet with Tuco and his mooks in a junkyard. Tuco is extremely disappointed when Walt and Jesse can only provide him with a half pound of meth and blames it on production problems, but Walt requests a loan from Tuco so he can buy the materials to produce a total of four pounds, calling it "a capital investment." With this Walt convinces Tuco to give him the money, but Tuco makes sure to warn him that owing money to a guy like him is a bad idea.

Back at Jesse's, Jesse asks Walt how the hell they are going to get enough pseudo to make four pounds of meth, but Walt has a plan and tells Jesse that there is another way. He hands him a list of chemicals and asks him to gather the stuff. Jesse protests that he "can't even pronounce half this shit," but Walt encourages him to believe in himself, and he takes on the mission.

Walt and Skyler throw a baby shower, and Marie brings an extremely expensive gift; a baby tiara in white-gold, a bit to Skyler's discomfort. That night Skyler thinks about returning the tiara, but Walt switches the subject to alternative medicine and talks about going to a Navajo sweat lodge for the weekend, so he has an excuse to cook with Jesse.

Walt meets up with Jesse, who is happy to announce that he got all the supplies Walt asked him for, except for the methylamine, which turns out to be the key ingredient for Walt's new recipe. Jesse had found some professionals who were willing to steal it from a secure warehouse, but their price was too steep. Walt, however, devises a plan for himself and Jesse to steal it themselves: by breaking the lock with thermite, produced with aluminum powder extracted from "Etch-A-Sketch" toys.

Meanwhile, Skyler attempts to return the tiara to the jewel store and is almost arrested, as a woman matching her general description stole the tiara some days ago, but she manages to get away by pretending to go into labor. She realizes that Marie must be the one who stole it.

That night, Jesse and Walt sneak into the warehouse area, where they, in a stroke of luck, manage to trap the guard inside a porta-potty. Walt's plan with using thermite on the lock goes off without a hitch, and he and Jesse manage to get away with a whole barrel of methylamine. But the next day the RV won't work, so they start producing in Jesse's basement. The problem is that Jesse has had a real estate agent to arrange an open house that day, and he can't get a hold of her to cancel it. Walt tells him to keep the people who have shown up away from the basement. Jesse, after futilely trying for some time to keep the people from the basement door, announces the house isn't for sale anymore.

Skyler tries to confront Marie about her theft of the tiara, but Marie denies any knowledge and refuses to apologize.

Walt and Skyler come home, and Skyler, outraged, tells him that Marie stole something and denied it when confronted. Walt tells her that "people sometimes do things for their families." Skyler asks him if that justifies stealing, and Walt asks her what if it was him who did something criminal; if she would then divorce him and turn him in to the police. Both playful and serious, she replies, "You don't want to find out."

Walt and Jesse meet with Tuco again, and present the four pounds of meth as promised. Tuco is curious to know why the meth is blue, and Walt explains that they used a different process, but Tuco concludes that he is happy with the result regardless of the color, and tells Walt that he will gladly keep paying him as long as he keeps bringing him meth. The deal seems to be over, but one of Tuco's henchmen, No-Doze, decides to warn Walt and Jesse against crossing Tuco. Tuco is furious that an underling would presume to speak on his behalf, and beats the poor guy to a pulp in a fit of rage. As Tuco walks laughing away, Walt and Jesse looks on in shock at what just happened, realizing that they're in pretty deep.

"Today is the first day of the rest of your life."