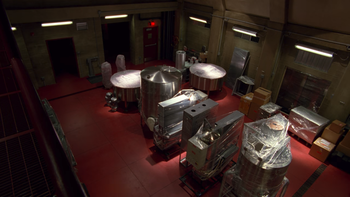 Come with me, and you'll be in a world of pure imagination...
"When you have children, you always have family. They will always be your priority, your responsibility, and a man, a man provides. And he does it even when he's not appreciated or respected or even loved. He simply bears up and he does it. Because he's a man, Walter."
— Gus Fring
Advertisement:

Some months ago, when Walt and Jesse were just beginning their partnership, Walt gives Jesse his life's savings to purchase an RV to use as a mobile meth lab. Jesse immediately uses the money to invite his friends Combo and Skinny Pete to party at a strip club. When the bar closes in the morning, Jesse realizes he only has about $1400 left: with Walt blackmailing him into helping him cook, Jesse realizes he's screwed up bad. Combo, however, offers to help out: he has an RV at his home that he's willing to give to Jesse in exchange for the money.

In the present day, as Skyler's affair with Ted continues, Walt argues with Jesse on the phone over Gus unexpectedly giving Walt half of his payment for the meth Jesse had sold him. Jesse is pissed that he only got half of his money from the meth he cooked, while Walt is just as pissed with Jesse over using his formula without his say-so.

Meanwhile, Hank and Gomez search for Heisenberg's RV meth lab after catching its model on a gas station ATM camera. As their search proves fruitless, Gomez confides in Hank that he has been given the offer Hank had turned down: he is being promoted to the position at the El Paso DEA office. This leaves Hank depressed and angry: while Marie believes his staying in New Mexico was due to his traumatic experiences during his last excursion to El Paso, Hank angrily retorts that he's staying because he's doing "important work".

Walt visits Gus at Los Pollos Hermanos, and questions the wisdom in pretending to collaborate with Jesse to manipulate Walt back into cooking. Walt thinks Gus sees him as overly proud and is just trying to provoke him by buying his product from Jesse. When Gus explains that Jesse's cook was "more or less" just as good as his own, Walt is visibly insulted and disagrees, stating that "the chemistry must be respected". After apologizing for being transparent, Gus asks Walt to accompany him. He takes him to an industrial laundromat his company owns.

Concealed under the laundromat is a massive, state-of-the-art superlab built to make industrial quantities of meth, with the chemicals already shipped to the laundromat and a highly advanced filtration system making it practically hidden in plain sight. Gus again makes his offer to Walt: in exchange for cooking two hundred pounds of meth per week, he would pay Walt three million dollars for three months work, with Walt allowed to work his own hours so long as he met each week's quota. Walt is impressed with the offer and the facilities in which he would work, but declines once more, explaining that he had made one too many bad decisions and lost his family. Gus argues that Walt's decisions weren't truly wrong if he did everything for the sake of his family, explaining that a true "man" does anything to provide for his family, even if his family doesn't appreciate it.

When Marie calls Skyler to voice her concerns about Hank, she tells her that Hank had changed since his last trip to El Paso. "Facing death...it has to change someone", she states. Skyler takes this to heart, thinking about Walt facing death during his battle with cancer, and begins to second-guess her affair with Ted. When she returns home after declining an invitation to dinner, she sees Walt gazing lovingly at the daughter she did not allow him to touch. Feeling a small pang of guilt, she offers to let Walt hold their fussy daughter.

Skyler examines the duffel bag of Walt's drug money that he'd shown her. She consults with her divorce lawyer once more, confessing her affair and bringing up the money (though she denies that she was asking permission to spend it). The lawyer warns her once more to leave, and that she was now an accessory to Walt's crimes after the fact. When she returns home, however, she finds Walt gone, along with his belongings and money. He'd left their now-signed divorce papers behind for her. Skyler, however, is unsure what to make of this development...

Walt and Jesse meet at Saul's office. There, Walt gives Jesse his half of the money made from Jesse's cook, telling him to "spend it in good health", because Jesse is "out" of the professional meth cooking industry: Gus was only using Jesse to get to Walt, and now Walt is back in business. As far as Walt's concerned, Jesse can cook whatever garbage he wants, as long as it's not Walt's formula. Jesse dares Walt to try and stop him, then storms out, cracking Walt's windshield with a large rock before leaving.

Meanwhile, Hank's investigation into the RV hits a dead end. When he asks his secretary to check with the DMV once more during Gomez's farewell party, she finds one more registration of an RV that had not been renewed, but never marked as non-working, stolen, or destroyed. This leads Hank to the home of Mrs. Ortega, the RV's owner, who explains that she never reported it stolen because she didn't want her son to be arrested.

To Hank's surprise, the RV had been stolen by none other than Christian "Combo" Ortega.

When Hank looks in Combo's room for clues, he finds a photo of the night that Combo spent at the strip club with his friends, one of whom he recognizes: Jesse Pinkman...