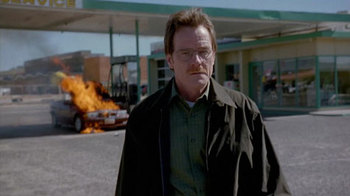 Ken loses.
"So be on notice. We got new players in town. We don't know who they are, where they come from, but they possess an extremely high skill-set. Me personally? I'm thinking Albuquerque just might have a new kingpin."
—Hank Schrader
Advertisement:

Walt, Hank, Skyler, Marie, and Walt Junior enjoy a family barbecue. The fun times are interrupted when Skyler bursts into tears, and Walt reluctantly reveals to everyone the secret he had been hiding: he has cancer.

Meanwhile, Jesse brags to his friends Combo and Skinny Pete about the meth he had cooked up. He shares some samples with them and enjoys some, himself, but suffers a hallucination that causes him to see a pair of Mormon missionaries as bikers come to kill him, compelling him to drive away in a hurry.

Skyler arranges to have Walt visit an oncologist to have his cancer treated. The price of the visit gives Walt pause, but he agrees to borrow money from his pension to pay for the visit. As he gathers some of the money he hid away in the AC vent of the baby's room, Junior sees him. Walt deflects suspicion by claiming he was looking for mice, Junior asks him "What the hell is wrong with you?!", disturbed by his nonchalance in the face of cancer.

Walt goes to the bank the next day. After having his parking space taken by a blowhard named Ken and waiting in line as Ken bragged loudly into his Bluetooth headset, he gives the bank teller a wad of cash and asks to have a cashier's check made out to the oncology office.

Elsewhere, Jesse is caught trying to sneak back into his parents' home. Jesse's mother and father debate whether to let him stay, worried about whether he was still using and what influence he would have on his younger brother, an honor student named Jake. Jesse tries awkwardly to reconnect with Jake before going back to his old room and looking back on drawings he made when he was in high school, including a doodle he made mocking Walt on the back of a test he had failed.

The next day, Jesse meets an angry Walt at the latter's house. Jesse tries to convince Walt to make more meth, but Walt is adamantly against a repeat performance of their last debacle. In a huff, Jesse gives Walt his share of the batch they had sold: $4,000.

As Walt meets with the oncologist to discuss possible treatment for his cancer, Jesse returns back to his parents' house, only to learn that they had found a joint of weed in his room and are kicking him out. In truth, the weed was Jake's. Jake thanks Jesse for covering for him, and asks for the joint back, but Jesse disposes of it, claiming that it was "skunk-weed".

When Walt returns home, he and Skyler debate the treatment the oncologist offered. At $90,000 dollars, Walt is reluctant to commit to treatment that, with his cancer being so advanced, is a long-shot. Junior, overhearing the conversation, interjects, saying "Why don't you just fucking die, already?"

Some time after, Walt is driving to a gas station when he encounters Ken again. Holding a grudge against the blowhard for earlier, he pops the hood of Ken's convertible, lays a wet squeegee on the battery's terminals, and walks away with a smug satisfaction as the car catches fire and explodes.

"Then why don't you just fucking die already? Just give up and die."