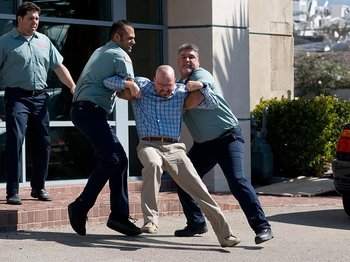 Walt is gently escorted from the premises after communications with Ted break down.
"You know, Walter, sometimes it doesn’t hurt to have someone watching your back."
— Mike
Advertisement:

Jesse fills the RV up with gas after cooking a batch of meth out in the desert, but doesn't have any cash on him. He charms the cashier into accepting a sample of his meth as payment.

Mike meets with Saul to discuss Walt's situation. Mike's bugs picked up a heated argument between Walt and Skyler after she'd told him she'd slept with Ted, leaving them concerned.

Walt goes to Beneke Fabrications to confront Ted, but is escorted off the premises by security, then forcibly picked up by Mike, who drives him to Saul's office. As Saul chastises Walt for his reckless behavior, Walt realizes that he must have been bugged and fires Saul, who declares he'll stop laundering Walt's money through SaveWalterWhite.com. Walt also demands the bugs in his house be removed.

Hank is on his way back to El Paso after a promotion, but Marie is worried that he'll be in danger like his last trip to the border. Hank tries pretending to be unconcerned, but when Gomez calls to tell him that blue meth has been found on the street again, he quickly abandons his trip to follow the lead.

Walt, still incensed over Skyler's affair, tries to seduce his own boss Carmen, but to no avail: this, combined with his slipping performance at work, results in him being fired. As Walt is leaving the school with his belongings, Jesse arrives: he wants to get back into cooking because, according to him, it's the only thing he's good at. Walt tries to encourage him and tells Jesse that he's out for good. Jesse is fine with this, though, because he's been cooking on his own and has proudly brought a sample to show Walt. He asks Walt to help him get in contact with Gus so he can sell his batch. Walt is suddenly furious and tells Jesse that he has no right to cook Walt's formula—plus, Jesse's meth is complete garbage. An angry and hurt Jesse speeds off with Walt's cardboard box of belongings still on the roof.

As Skyler continues her affair with Ted and Hank's ASAC badgers him about delaying his trip to El Paso, Mike meets with Gus to discuss Walt and his brush with death at the hands of the Cousins. Mike suggests telling Walt about the Cousins and that working for Gus could save him. Gus, however, doesn't want to scare Walt into working for him: he sees Walt as an investment, and fear would not be an effective enough motivator. In addition, Mike passes on a message from Saul: Jesse is looking to work with Gus. Gus is reluctant to work with an addict, but when Mike tells him that Walt and Jesse are no longer on good terms, Gus considers and gives him permission to "do the deal".

Hank continues to investigate Heisenberg, his search leading him to a gas station where a young man with Sky Blue paid for his gas in drugs. While the security camera in the store doesn't work, he does manage to get an image of his vehicle from an ATM: an 80s Fleetwood Bounder, of which there was only a small number registered in New Mexico. As he conducts his investigation, ASAC Merkert tells Hank that El Paso cannot afford to wait for him to wrap up his investigation of Heisenberg any longer and tells him he must decide if he is going to El Paso now. Hank ultimately declines, desperately claiming that his work in Albuquerque is too important.

At an isolated overpass, Gus' employee Victor meets with Jesse to pay him for his batch. When Jesse looks in the sack of money he is given, however, he realizes that there is only half of the full amount he was expecting inside: "Your half", Victor clarifies.

Walt is driving through the desert when he hears a news report about Donald Margolis, Jane's father, who is in the hospital after attempting to commit suicide following his role in the Wayfarer 515 crash. While Walt fights back his guilt, Victor drives up next to him and tosses a bag of cash through his window: "Your half", Victor states before driving off...