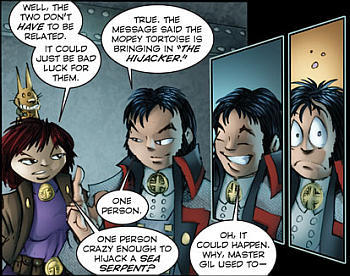 WELP! There goes HIS weekend.
Irwin: What if this kid's telling the truth? We can't have toys out on the market that may be dangerous.
Larry: [lackadaisical] How can they be dangerous? Everything on them is standard. The design is standard, the materials are standard... the mechanicals are standard. Even the... [sudden Oh, Crap! face] Oh.
Irwin: What's "Oh"?
Larry: What?
Irwin: You just said "Oh".
Larry: No, I said "Oh!"
Irwin: You mean "Oh" like, "That's interesting" or "Oh" like, "We're screwed"?
Larry: No. I mean, "Hey! Whoa! Oh!". Look, forget the "Oh". I'll go to legal to start on the countersuit.
Irwin: The chips! That's the "Oh"!
— Small Soldiers
Advertisement:

Bob has the situation under control, and is explaining it to his partner, Alice. While he initially thought everything was fine and going to plan, it's only once he stops to think about it and hears himself say it aloud that he realizes how much trouble he and Alice are really in.

Essentially, a case of in-universe Fridge Logic (or Fridge Horror) catching up to the characters, can be Played for Laughs or drama. Can be triggered by the listening party's Let Me Get This Straight... putting a new perspective on Bob's explanation.

The Oh, Crap! can also be simply that there really is No Time to Explain. Some situations go further with this, having the feared event happen directly after it's realized, which is a case of Five-Second Foreshadowing.

The Placebo Eureka Moment is an inverse, in which the act of explaining leads to a solution rather just than a realization that there's a problem. Not to be confused with I Can Explain or Not Helping Your Case.

Compare Punch! Punch! Punch! Uh Oh..., You Answered Your Own Question, Delayed "Oh, Crap!" (when the character doesn't realize how screwed they are until after they're done explaining), Digging Yourself Deeper (when a character's already in trouble and doesn't realise they're giving away more than they should until it's too late, upon which this trope swiftly applies), and I Never Said It Was Poison (when the realization is that there's something previously told by another character that doesn't fit the facts or make them fit all of a sudden).